Posted on Friday, Jul 10 2015 @ 12:25 CEST by Thomas De Maesschalck
Like clockwork, Gartner and IDC present their PC shipment research data on the same day. Both research firms use their own methodology so the figures vary a bit but the overall conclusion is that PC sales are still dropping hard. Gartner writes PC unit shipments fell to 68.4 million units last quarter, a 9.5 percent drop versus Q2 2014, while IDC talks about a 11.8 percent fall to 66.1 million units.

IDC writes that while the second quarter decline in PC shipments was significant, and slightly more than expected, the overall trend fits with expectations. The firm offers a multitude of explanations for the lower sales volume, including the fact that last year there was somewhat of an uptick in sales related to the end of Windows XP support. Other reasons include higher PC pricing in many parts of the world due to the strong dollar as well as the reduced inventory in the channel ahead of the introduction of Windows 10.

"Although the second quarter decline in PC shipments was significant, and slightly more than expected, the overall trend fits with expectations," said Loren Loverde, Vice President, Worldwide PC Trackers & Forecasting. "We continue to expect low to mid-single digit declines in volume during the second half of the year with volume stabilizing in future years. We're expecting the Windows 10 launch to go relatively well, though many users will opt for a free OS upgrade rather than buying a new PC. Competition from 2-in-1 devices and phones remains an issue, but the economic environment has had a larger impact lately, and that should stabilize or improve going forward."

"The U.S. market was in line with forecasts, declining -3.3% from a year ago, after avoiding the global market declines over the past five quarters. Soft retail demand, short term weakness from inventory reductions, some cannibalization from competing devices, and low demand for large commercial refreshes are among the factors that reduced PC shipments," said Rajani Singh, Senior Research Analyst, Personal Computers. "Nevertheless, moving forward, we expect a healthy second half as inventory and purchase decisions pick up following the launch of Windows 10. Emerging product categories will remain a bright spot as attention shifts to convertibles and Chromebooks in the commercial as well as consumer segments."

Below is the list of the largest PC shippers in Q2 2015 as calculated by IDC. The figures show that with the exception of ASUS, four out of five of the world's largest PC makers managed to increase their marketshare versus the same period the year before. Apple was the only one showing growth, IDC estimates Apple saw its shipments soar by 16.1 percent in the declining PC market.

Gartner points out this was the steepest PC shipment decline since Q3 2013 but explains the market is expected to go back to slow and steady growth in 2016 as the firm believes the major reasons behind the drop in shipments are temporary events.

"The price hike of PCs became more apparent in some regions due to a sharp appreciation of the U.S. dollar against local currencies," Mikako Kitagawa, principal analyst at Gartner. "The price hike could hinder PC demand in these regions. Secondly, the worldwide PC market experienced unusually positive desk-based growth last year due to the end of Windows XP support. After the XP impact was phased out, there have not been any major growth drivers to stimulate a PC refresh. Lastly, the Windows 10 launch scheduled for 3Q15 has created self-regulated inventory control. PC vendors and the channels tried clearing inventory as much as possible before the Windows 10 launch."

When you compare Gartner's top PC maker chart with the one from IDC there are some big differences. The top three is the same but the marketshare figures and (negative) growth rates vary significantly. Another major difference is that while IDC claims Apple is the fourth largest PC maker in the world, Apple isn't even part of Gartner's top five. 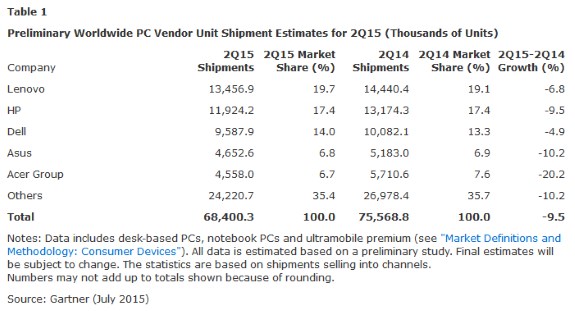