Posted on Monday, Jul 13 2015 @ 14:22 CEST by Thomas De Maesschalck
MSI teases a photo of the Z170 Krait Gaming, an upcoming LGA1151 motherboard for Intel's Skylake processors. Expected to ship in early August, this motherboard adopts a black-and-white color scheme. It has 8-phase VRM for the CPU, four DDR4 memory slots supporting up to 64GB of dual-channel memory and two PCI-Express 3.0 x16 slots (x8/x8 when both are populated).

Other expansion slots on the Z170 Krait Gaming include a third PCI-Express 3.0 x16 (electrical gen 3.0 x4, wired to the PCH), three PCIe 3.0 x1, and a legacy PCI slot. The board offers MSI's AudioBoost 3 onboard audio solution, and Killer E2205 gigabit Ethernet. Storage connectivity includes six SATA 6 Gb/s ports (from which two can convert to a SATA-Express 16 Gb/s port), and one M.2 slot. Display outputs include DVI, HDMI, and DisplayPort. 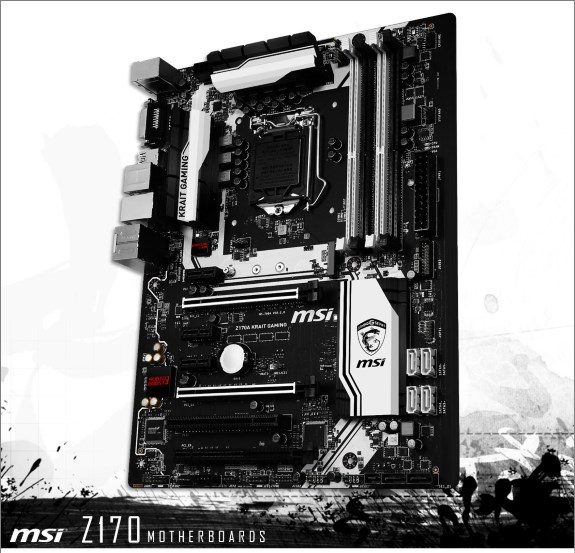