Take it with a grain of salt but some new Intel desktop roadmap slides were leaked over at Asian tech forum Xfastest. The leak confirms an August 5th launch date for Skylake and reveals details about Broadwell-E, Intel's upcoming enthusiast platform refresh. The slides below reveal the model numbers as well as how the new chips are positioned in the market. XE means eXtreme Edition, P1 and P2 are variants of Performance Level 1 & 2 and the MS nomenclature stands for mainstream. 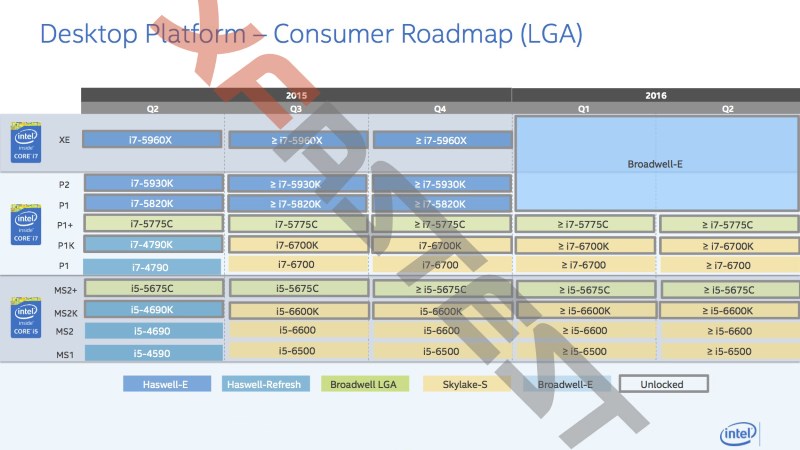 Then you also have the Traditional, Low End and Value segments. These segments will receive Skylake in Q4 2015. 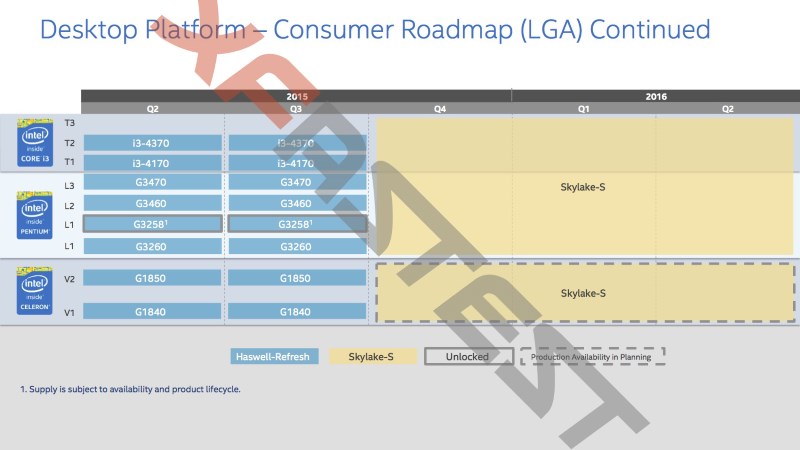 If the leak is accurate, the Broadwell-E HEDT platform will have six and eight core options with up to 20MB Intel Smart Cache, Turbo Boost 2 technology, Hyper-Threading, an integrated quad-channel DDR4-2400 memory controller and up to 40 lanes PCIe 3.0 (2x 16 + 1x 8). Broadwell-E is compatible with the Intel X99 chipset, it uses the LGA2011-3 socket and has a TDP of 140W.

Ofcourse, both the X and K series processors will have unlocked multipliers and DDR4 memory support (2400Mhz natively without over clocking the memory controller). And if you are contemplating going for a Crossfire or SLI setup of more than 2 GPUs, you will most definitely need the last feature: 40 lanes of PCIE 3.0. The X99 Chipset Wellsburg will support CPU (Ratios and BCLK) and GPU overclocking and will have all the usual features such as Intel Rapid Storage and RST Smart Response Tech (and Rapid Recover too). It will have 14 USB ports and 10 Sata ports. Interestingly it will also feature Intel’s Integrated Clock Support. X99 will ship with support for AVX 2.0 and will also have the Fully Integrated Voltage Regulator. 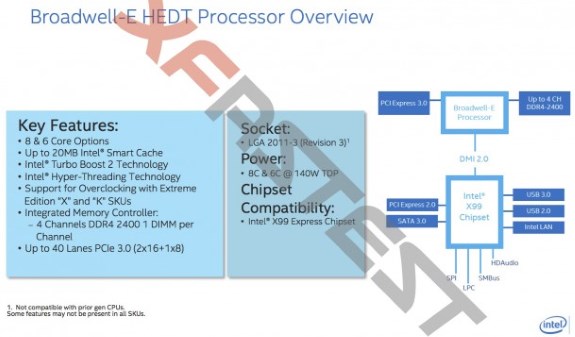