CaseLabs apologizes to ThermalTake for accusations about stolen designs

Posted on Friday, Jul 17 2015 @ 11:50 CEST by Thomas De Maesschalck
Remember all the fuzz from early last month about ThermalTake allegedly stealing CaseLabs case designs? The story just took an unexpected turn as CaseLabs has not only retracted its statements but issued a formal apology!

CaseLabs apologizes for making unfounded statements about ThermalTake and regrets the attacks it made on ThermalTake's Shannon Robb. Furthermore, CaseLabs confirms it does not own any patents on any of its case products, admits the look of a computer case will always have some similar features and regrets its statements about Asian low-price competition:

Recently, CaseLabs and some of its personnel, including Kevin Keating, posted attacks upon Thermaltake. Those attacks have included accusations that Thermaltake and one of its employees, Mr. Shannon Robb, "stole" CaseLabs' case design and engaged in unfair competition. CaseLabs now regrets those statements and apologizes for making them.

CaseLabs’ accusations were false. As CaseLabs admits in its retraction and apology letter:

“CaseLabs acknowledges that it does not own any patents on any of its case products. CaseLabs' postings, which suggested that litigating to enforce patents would be prohibitively expensive, were misleading, because they implied that CaseLabs actually owned patents, which it does not. CaseLabs regrets this error. CaseLabs apologizes for accusing Mr. Robb and Thermaltake of "stealing" anything. The look of a computer case will always have some similar features - given its functional nature. CaseLabs retracts its accusations against Thermaltake for "copying other people's existing concepts and calling them your own" and of producing "rip-off products."

The unflattering comments about overseas competition have also been retracted by CaseLabs. Again quoting from CaseLabs’ retraction and apology letter:

“CaseLabs looks forward to engaging in vigorous, price-conscious, ethical competition with its competitors, including Thermaltake, without resort to false accusations.”

CaseLabs has also written to ask Nathan Kirsch of Legit Reviews to remove his article regarding CaseLabs’ accusations against Thermaltake.

Kenny Lin, CEO of Thermaltake, responded to CaseLabs’ retraction and apology letter with the following quote:

“Thermaltake appreciates CaseLabs’ retraction and apology for its false accusations against Thermaltake. Having received this apology from CaseLabs, Thermaltake hopes that our two businesses can return to healthy competition in the marketplace, without resort to name-calling or false representations. Thermaltake will continue to compete vigorously in the always competitive computer peripherals market, where Thermaltake will continue to work closely with consumers to observe their behavior and to respond to their needs. Thermaltake’s products are user driven. Thermaltake is dedicated to building aesthetic and high quality products which will greatly improve system performance and bring the user to his or her highest potential. Thermaltake is proud of its IP portfolio, including patents and trademarks, and exceptional product lines, but most of all, we are proud of the customers we serve and of our personnel who serve them.” 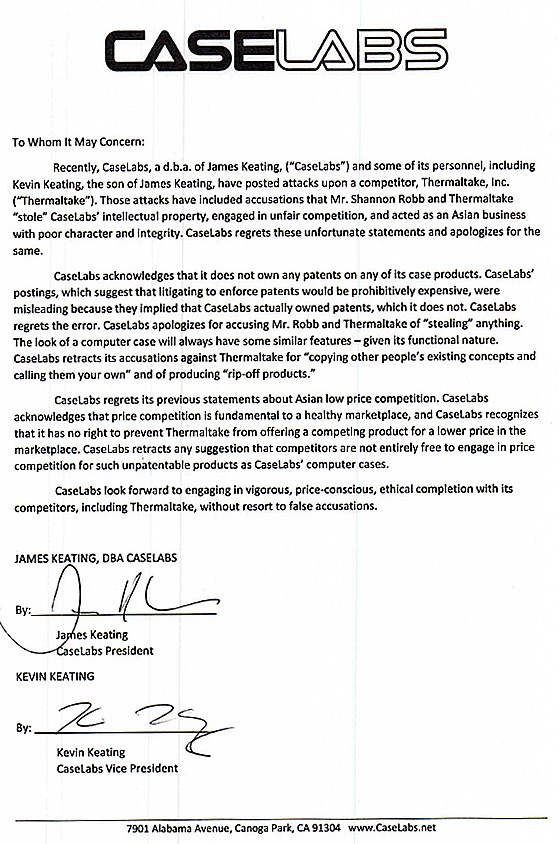 If you also want to read the letter issued to Legit Reviews, you can find it at ThermalTake.