Posted on Tuesday, Jul 21 2015 @ 11:53 CEST by Thomas De Maesschalck
One of the interesting new functionalities of Windows 10 is Game DVR, an app that lets you capture gameplay or just about anything that comes on your screen. The inclusion of this Xbox ap is part of Microsoft's goal to make Windows 10 more about gaming, there will even be a special shortcut (Windows button + G) so you can bring up the software very quickly.

The video clips are stored in the Videos/Captures folder and via the Xbox app you can do basic edits and share the content via the Xbox Live network. Videos recording is restricted to 1080p and the minimum hardware specification is Intel HD graphics 4000, GeForce 600/800M or AMD Radeon HD 7000 series.

The function has been tested and works with any app, but only within apps; you can't record your desktop and need an application open for the screen capture to work. All you have to do is press 'Windows + G', which brings up a toolbar that allows you to both take a screenshot or capture video, saving you a bit of money on professional screen capture software like Camtasia. Granted, the Windows 10 implementation is much more barebones than the professional suite but for those who want a simple solution, the free function doesn't hurt. 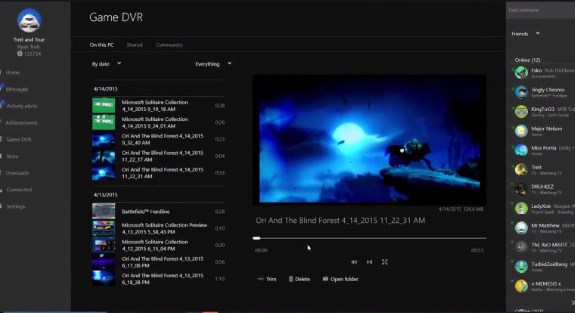