The overclock was achieved on an MSI Gaming Z170 motherboard with a single DDR4 memory module clocked at 4287MHz, which is also a near-record frequency for DDR4. The CPU was overclocked from its default clockspeed of 4000MHz to 6531MHz without deactivating any cores or the Intel Hyper-Threading feature. The voltage was increased to 2.032V and the chip was chilled using LN2 cooling.

While 6.50GHz frequency is, without any doubts, a very high clock-rate, it is not something that has never been achieved with the help of liquid nitrogen by Intel’s enthusiast-class central processing units. Various “Sandy Bridge”, “Ivy Bridge” and “Haswell” processors were overclocked to 6.50GHz and even 7GHz in the recent years by various enthusiasts.

Intel's first Skylake desktop chips are expected to be revealed at Gamescom in early August. 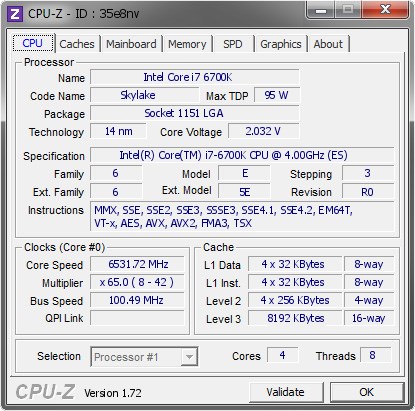