Posted on Tuesday, Jul 28 2015 @ 14:57 CEST by Thomas De Maesschalck
An energy-efficient WiFi chip that doesn't need a conventional transmitter/receiver has been cooked up in the labs of NASA's Jet Propulsion Laboratory (JPL) in Pasadena, California and the University of California, Los Angeles (UCLA).

The new chip is based on the principle of reflection, the researchers explain the chip design acts as a switched reflector:

"Information transmitted to and from a wearable device is encoded as 1s and 0s, just like data on a computer. This needs to be represented somehow in the system the wearable device uses to communicate. When incoming energy is absorbed by the circuit, that's a "0," and if the chip reflects that energy, that's a "1." This simple switch mechanism uses very little power and allows for the fast transfer of information between a wearable device and a computer, smart phone, tablet or other technology capable of receiving the data."

In tests, researchers achieved a bandwidth of close to 330Mbps over a distance of 2.5 meters while using 1,000 times less power than a traditional WiFi chip. The chip was also tested at distances of up to 6 meters but details about the speed/power consumption results under those circumstances weren't shared.

The reflection-based WiFi chip created some new issues, in particular with background reflections off objects within the environment which would confuse the signal. This issue has been worked around via a chip that can sense and suppress background noise.

Another issue that the researchers are still working on is the power consumption of the WiFi router or base station. While the WiFi chip requires a lot less power, the base station needs to use more energy in its transmission and receiving work.

At first sight the reflection-based WiFi chip seems a discovery that may reduce the power consumption of future connected, wearable devices. NASA JPL and UCLA own the patent and have already signed agreements to commercialize the technology. 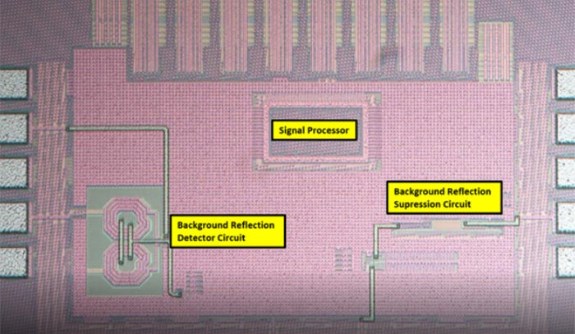