Posted on Tuesday, Jul 28 2015 @ 17:54 CEST by Thomas De Maesschalck
Mionix shows off the Castor, a new gaming mouse designed to support palm, claw and fingertip-grip. This six button mouse has a 16.8 million color RGB LED light system with various light effects like breathing, blinking, pulsating and color shift. The mouse is intended for right-handed gamers and supports all five fingers, it even has dedicated ring and pinkie finger grooves and has an enhanced rubber grip to ensure maximum grip and soft touch feel.

The Castor mouse has a Pixart PMW 3310 IR-LED optical sensor with support for up to 10,000dpi and no positive or negative hardware acceleration. Other features include 128kb built-in memory for profile management, live macro recording, three-step in-game DPI adjustment, in-game profile switch, adjustable polling rate, and adjustable lift off distance.

Setting a new standard in ergonomic comfort and gaming performance, Mionix today announced the CASTOR, the latest entry in their stellar lineup of premium gaming mice. Named for one of the brightest stars in the night sky, the 6-button, multi-color optical CASTOR mouse is crafted especially for right-handed gamers with dedicated ring and pinkie finger grooves and enhanced rubber grip, and features the outstanding technical performance that has made Mionix a cult favorite worldwide.

The CASTOR’s unique shape has been developed to be used by right-handed players to equally support palm, claw and fingertip-grip. The mouse has a dedicated pinky- and ring-finger support-groove which makes it extremely comfortable to hold and lift. The PMW-3310 gaming grade optical sensor has no positive or negative hardware acceleration, amazing accuracy, smooth tracking, and a maximum speed of more than 5.45m/sec (215 IPS), all the way up to 10000DPI. It is the choice of the world’s top pro-gamers and widely considered as the best gaming sensor currently available.

Mionix will ship the Castor mouse in September for 69.99EUR, US pricing will probably be around $69.99. 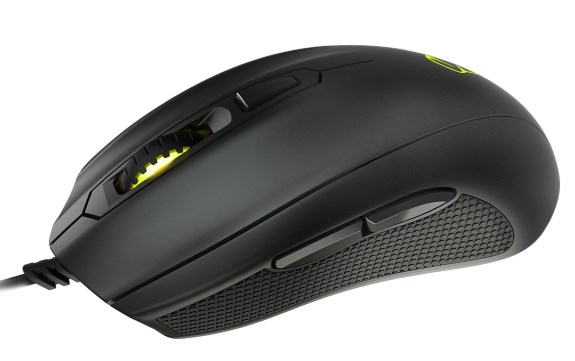