Western Digital released its fiscal Q4 2015 financial results yesterday. During the most recent fiscal quarter, WD shipped a total of of 48.52 million hard disk drives, a huge decline from the 63.097 million the firm shipped during the same period a year earlier. The big drop is primarily in the firm's consumer HDD shipments and the trend isn't looking pretty.

As you can see in the chart below, WD's total HDD shipments are now at the levest level since the company's production capacity was severely impacted by devastating floods in Thailand in 2011. WD believes enterprise HDD shipments will continue to grow and expects shipments of HDDs for client PCs will stabilize in this quarter and may return to growth in the final quarter of this year.

WD believes that going forward shipments of enterprise-class hard disk drives will continue to grow thanks to various innovative devices, such as helium-filled HDDs with ultra-high capacities. Sales of hard drives for client PCs are expected to stabilize in Q3 and then could grow in Q4 of calendar 2015.

“We believe [personal computer market demand] is prudent to remain cautious in the near term given the timing of Windows 10 and ‘Skylake’ launches,” said Stephen Milligan, chief executive officer of WD, during the earnings conference call with investors and financial analysts. “That being said, we are seeing early signs of market stabilization, leading us to believe that PC market demand could pick up towards the end of this calendar year.” 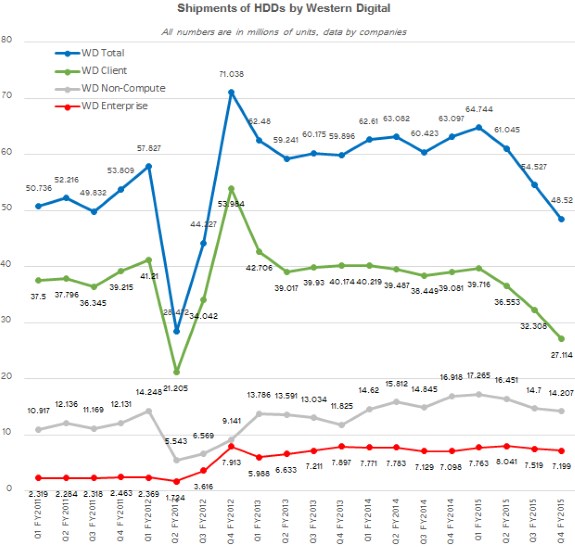