Posted on Friday, Jul 31 2015 @ 16:34 CEST by Thomas De Maesschalck
Previously MSI had two premium motherboard lines but starting with the Z170 this will no longer be the case. The motherboard maker is simplifying things by merging the OC Series and the Gaming series into a single line, of which the Z170 XPower Gaming Titanium Edition will be one of the first products.

This ATX motherboard has a rather attractive silvery-white color scheme, it features 16-phase VRM with tantalum capacitors, four DDR4 memory slots supporting up to 64GB of dual-channel RAM and our PCIe 3.0 x16 slots.

One of the special features of this motherboard is the OC Dashboard, a detachable module that plugs into headers around the voltage measurement points. This little board has overclocking controls as will as a rotary knob that offers automatic overclocking.

Expansion slots include four PCI-Express 3.0 x16, from which three are wired to the CPU (electrical x16/NC/NC or x8/NC/x8 or x8/x4/x4); the fourth is electrical PCIe 3.0 x4 and wired to the PCH. Three PCIe 3.0 x1 slots make for the rest of the expansion area. Storage connectivity includes two M.2 32 Gb/s slots, two SATA-Express 16 Gb/s, and eight SATA 6 Gb/s ports. Display outputs include one each of DisplayPort and HDMI. USB connectivity includes 4 USB 3.1 slots, which include a mixture of type-A and type-C, with a physical type-A port pointing "forwards." MSI AudioBoost 3 audio solution, and Killer E2200 NIC make for the rest of its connectivity. 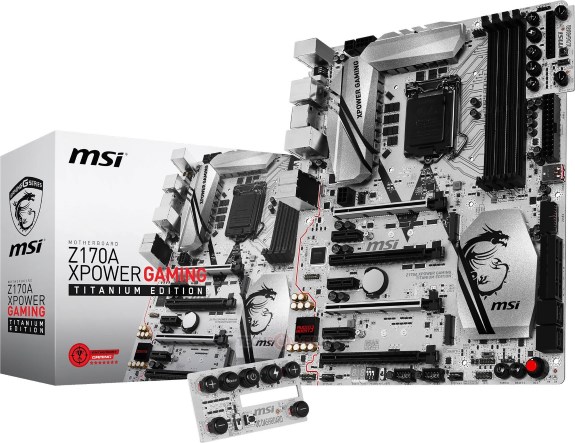