Posted on Wednesday, Aug 05 2015 @ 19:52 CEST by Thomas De Maesschalck
ASUS introduces its Z170 Pro Gaming motherboard, this is a line of motherboards intended for value-conscious gamers.

SupremeFX is engineered with effective shielding to prevent electromagnetic interference, preserving the integrity of audio signals for the best quality. It also has a 300-ohm-headphone amplifier to drive some of the very best headphones available for exceptional, immersive gaming audio and music-listening. The illuminated red-line shielding is even customizable, enabling the user to create eye-catching lighting effects.

For a helping hand on the battlefield, Sonic Radar II displays a stealthy overlay that shows what opponents and teammates are up to, all managed via a simple control panel and customizable game list. This allows the player to see the direction and origin of key in-game sounds, and practice enemy-pinpointing skill. It also includes exclusive Audio Enhancement technology to clarify every blast.

Z170 Pro Gaming has the very latest Intel Gigabit Ethernet (I219-V) integrated to reduce CPU overhead and deliver exceptionally-high TCP and UDP throughput, freeing up more computing power for gaming and gameplay. It also has ASUS-exclusive LANGuard with signal-coupling technology and premium surface-mounted to ensure reliable connections and better throughput, plus electrostatically-guarded and surge-protected components (ESD Guards) for 1.9X-greater tolerance to static electricity and 2.5X-greater protection (up to 15KV) against surges.

Z170 Pro Gaming includes Pro Clock technology, a dedicated base-clock (BCLK) generator designed for 6th-generation Intel processors that allows overclocked base-clock frequencies up to 400MHz.[1] This custom solution works in tandem with the ASUS TPU to enhance voltage and base-clock overclocking control. Boot times can be reduced, jitter is lowered and stability is increased under heavy overclocking — providing an exciting new way to boost performance to the extreme. 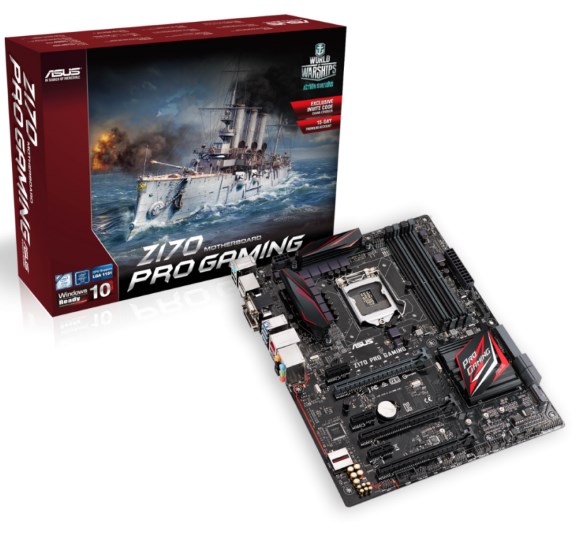