Toshiba Corporation today announced the development of the world’s first 16-die (max.) stacked NAND flash memory utilizing Through Silicon Via (TSV) technology. The prototype will be shown at Flash Memory Summit 2015, to be held from August 11 to 13 in Santa Clara, USA.

The prior art of stacked NAND flash memories are connected together with wire bonding in a package. TSV technology instead utilizes the vertical electrodes and vias to pass through the silicon dies for the connection. This enables high speed data input and output, and reduces power consumption.

Toshiba’s TSV technology achieves an I/O data rate of over 1Gbps which is higher than any other NAND flash memories with a low voltage supply: 1.8V to the core circuits and 1.2V to the I/O circuits and approximately 50% power reduction of write operations, read operations, and I/O data transfers.

A part of this applied technology was developed by the New Energy and Industrial Technology Development Organization (NEDO). 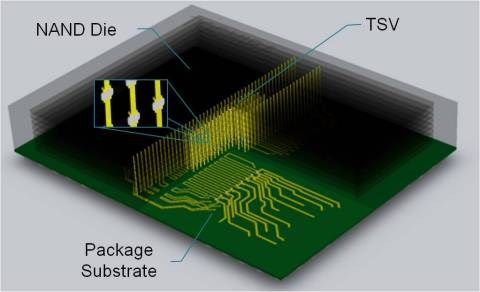