AMD is working on a coherent data fabric that will eliminate PCIe latency, the first product to receive this technology will be an upcoming exascale-class HSA (Heterogeneous System Architecture) multi-chip-module (MCM) for the server market.

The new interconnect method will offer nearly seven times more performance than the traditional PCIe interface: four Global Memory Interconnects (GMI) will reportedly offer a latency-free 100GB/s link between the CPU and GPU, much more than the 15GB/s at about 500ns latency provided by PCIe x16.

The first MCM with the coherent fabric will reportedly feature a Zeppelin CPU (presumably with Zen-based cores) and a Greenland GPU with High Bandwidth Memory (HBM) on the same chip package. The slide below reveals the Greenland GPU promises 4 teraflops of raw computing power and mentions there's a 500GB/s link between the GPU and the HBM. 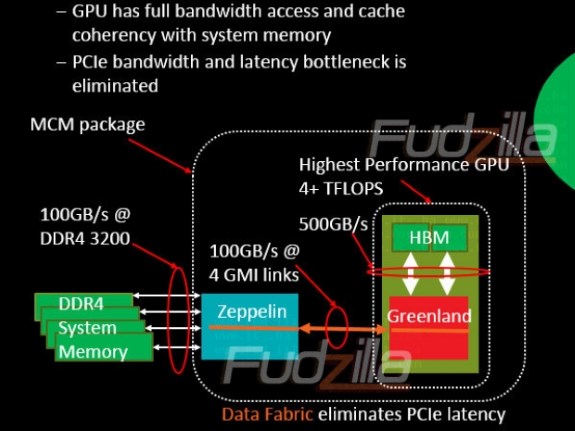