While we're still waiting on the retail availability of Intel's and Micron's 3D XPoint memory, Micron is already talking up its second-generation 3D XPoint as well as an all-new memory technology codenamed "New Memory B Gen 1".

Not a lot of details are known about second-generation 3D XPoint but it's believed this memory will focus on increasing capacity rather than further boosting performance, as the first generation already blows everything SSD-based out of the water.

Second-generation 3D XPoint is expected to be announced in 2016, with retail availability to follow in 2017. The mysterious "New Memory B Gen 1" will probably only each the market by 2018.

Looking further ahead, 'New Memory B Gen 1' will be purposed to ramp up performance and split the huge latency gap between non-volatile memory and DRAM performance according to an HPC Wire report. A later generation would follow with a 'performance focused' approach and could offer near DRAM latency speeds. 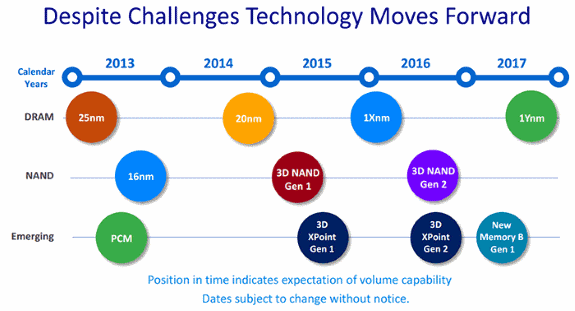