Posted on Wednesday, Sep 02 2015 @ 12:55 CEST by Thomas De Maesschalck
Despite a shrinking PC market, sales of SSDs are still growing as people are shifting away from HDDs to SSDs. Market research data from TrendForce claims unit sales were up 2.9 percent quarter-over-quarter in Q2 2015 to 23.86 million units, while total SSD capacity soared 13.3 percent quarter-over-quarter to 6.4 exabytes. SSDs still have a lot of room for growth, Western Digital estimated the total available market of HDDs at 111 million units in Q2 2015.

Based on the data, the average SSD has a capacity of 268GB and Samsung is by far the largest provider. In terms of unit sales, Samsung disks make up 43.8 percent of the market, making it more than four times as big as Kingston, which has a distant second place with 10.7 percent marketshare. SanDisk takes the third place with 9.3 percent and Intel is ranked fourth with 8.1 percent.

The top HDD makers are barely selling any SSDs though. WD/HGST has a marketshare of just 1.0 percent and Seagate as little as 0.1 percent.

TrendFocus notes that sales of 2.5” SSDs for notebooks declined, but shipments of Serial ATA SSDs for datacenters increased by whopping 48.6 per cent during the quarter. Sales of enterprise-class SSDs with SAS interface decreased by 10 per cent quarter-over-quarter. Shipments of solid-state drives with PCI Express interface were below 100 thousand units. 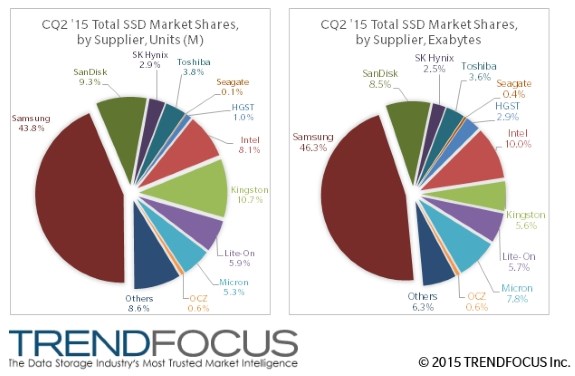