Referred to as "post-DDR4" in most of the slides, this may eventually become DDR5 memory, but that's uncertain as there may be radical changes to the interface and architecture of the memory.

The new memory targets the server, desktop and notebook markets, and Samsung says prototypes could be ready by 2018 with adoption slated for 2020. This type of memory will be made on sub-10nm processes and will serve the market until 2025 and beyond. Full details at KitGuru.

At the Intel Developer Forum last month Samsung Electronics revealed some preliminary targets, which post-DDR4 memory should be able to achieve. Data-rates of the next-generation system-DRAM will rise to up to 6.4Gb/s per pin with possibility for further increase, which will enable memory modules* with up to 51.2GB/s memory bandwidth. Capacities of memory devices will increase from 4Gb or 8Gb today to up to 32Gb within the life-cycle of post-DDR4, which will help to build mainstream modules (with 8 chips) with 32GB capacities. Increasing capacities of DRAM devices is very important because servers continuously require more memory. 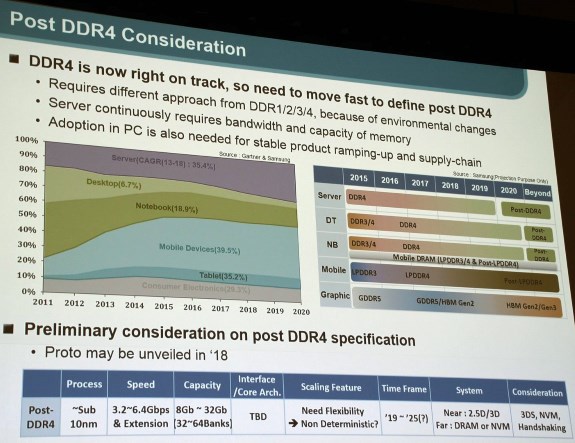