Word is going around that Intel's Broadwell-E enthusiast-class processors may be slightly delayed, mass production was previously slated for January 2016 but this has been pushed to to sometime in February/March 2016.

The reason for the delay isn't known but perhaps this means the chip giant will formally present its Broadwell-E chips at CeBIT in March. Broadwell-E will reportedly be compatible with existing LGA2011-3 motherboards based on the Intel X99 chipset.

Intel’s Core i7 Extreme “Broadwell-E” microprocessors will have six or eight cores with Hyper-Threading technology, quad-channel DDR4 memory controller (which will gain support for 2400MHz DDR4 SDRAM), 20MB last level cache, up to 40 PCI Express 3.0 lanes, unlocked multiplier and so on. 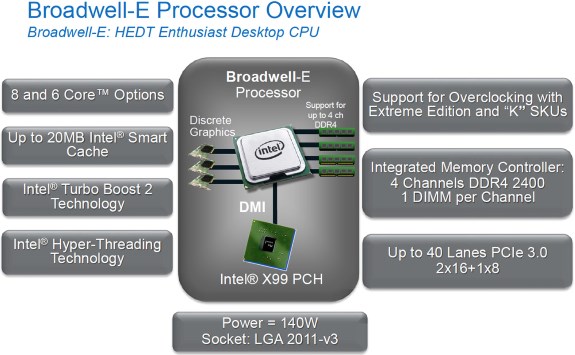