Posted on Wednesday, Sep 16 2015 @ 18:34 CEST by Thomas De Maesschalck
Lian Li shows off the PC-X510, a new oversized mid-tower case that measures 240mm x 620mm x 436mm (W x H x D) and weighs 7.8kg. The PC-X510 is made from aluminium and features a multi-heat zone design and like a lot of new cases it no longer supports 5.25" drives. The interior has room for up to six 2.5" or 3.5" storage disks, eight expansion slots, and VGA cards of up to 330mm. Cooling is provided by six included fans, three in the front and three in the rear of the case, and the airflow can be controlled with an integrated fan speed controller. The case should be immediately available for $399.

Lian-Li Industrial Co. Ltd unveils the PC-X510: a mid tower chassis with a tidy, spacious interior segregated into three distinct airflow chambers for optimal cooling and tempered glass to show it off. The PC-X510 has generous allowance for components, supporting as many as eight 2.5” or 3.5” drives and eight expansion slots.

Organized Airflow for Efficient Cooling
The Case is trisected into three airflow chambers. Three 120mm fans pull air through two long intakes along the front of the side panels. Each is covered by a washable magnetic mesh air filter strip. An additional two 120mm fans vent the top and central compartments, while the PSU exhausts the bottom compartment itself. This divides the airflow between the PSU, motherboard, and drive bay area so they don't influence each other. The included fan controller helps get the cooling just right.

Modular Customization Options
The top compartment of the PC-X510 features two removable drive trays mounted on shock-absorbing rubber grommets. Each tray holds two drives for a total of four 2.5” or 3.5” drives. One or both of the trays can be removed to accommodate ambitious cooling setups – up to two more additional 120mm fans or a 240mm water cooling radiator. An additional mount is located behind the motherboard allowing one tray to be hidden in the rear. It can be relocated from the top, or purchased separately to complement the two included, making a total of up to six vibration-dampened drives.

In the main compartment, two additional drives can be mounted on top of the PSU enclosure, bringing the grand total to eight! The three 120mm intake fans are mounted on a tool free holder; it can be taken out with just two thumb screws and replaced with a full-sized 360mm water cooling radiator. Pre-punched holes are located near the eight expansion slots to mount the optional tool free PCI retention system: http://www.lian-li.com/en/dt_portfolio/pci-01/

Generous Connectivity and Features
The PC-X510 offers HD audio in/out and four USB 3.0 ports on its top panel with a sliding cover. All air filters are removable, washable, and replaceable. The case stands on aluminum stands with rubber feet to prevent slippage. The back panel features liquid cooling grommets with mouse ears to allow external all-in-one water cooling kits to pass inside the case. The PC-X510 also includes a fan controller to adjust fan speed between 60% and 100%. 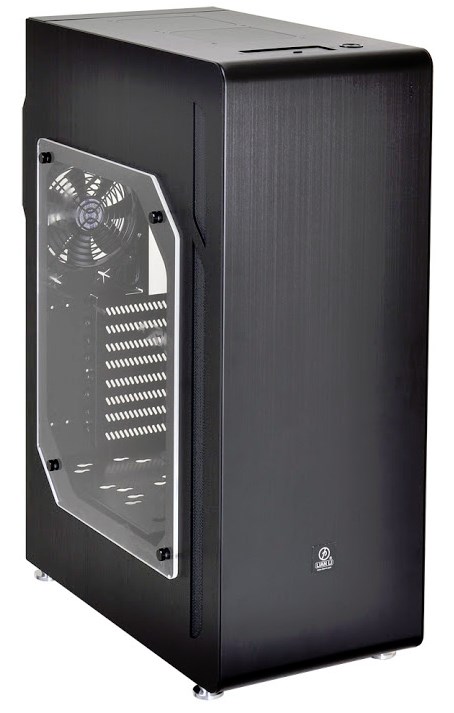 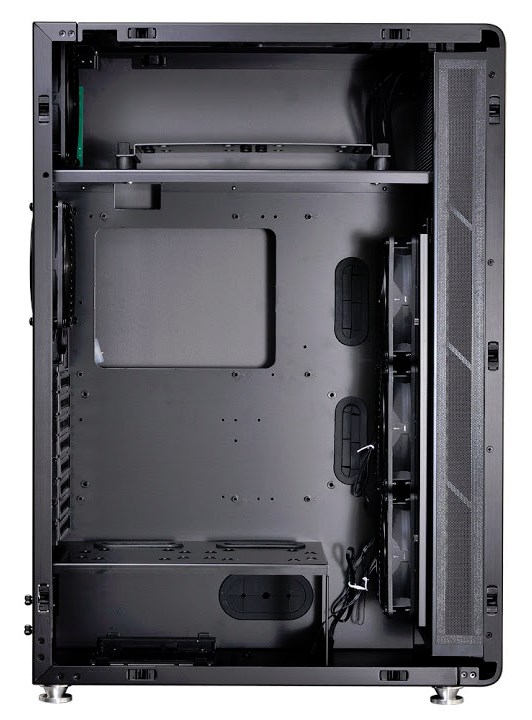