Posted on Monday, Sep 21 2015 @ 13:55 CEST by Thomas De Maesschalck
Intel will soon reveal its Purley-based Xeon E5 and E7 processors. These new server processors are based on the Skylake architecture and will feature up to 28 cores, resulting in a total of 56 CPU threads!

Intel will be unleashing its new Omnipath Architecture inside of the new Skylake-powered Xeon processors, something it calls Storm Lake (Generation 1). This new PCH will be codenamed Lewisburg, where it will include updated Ethernet controllers. The Skylake Purley update will also pave the way for Socket P, with a TDP that's configurable between 45W and 165W. The PCIe slots will have 48 lanes of bandwidth to play with, but this could change at any time. 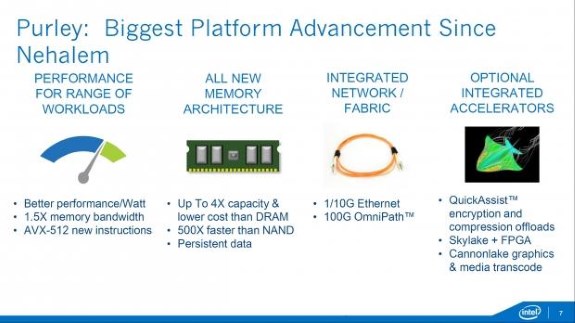