A quick e-tail check reveals pricing of just under 160EUR.

Based on the powerful Intel Z170 Express chipset, Z170I Pro Gaming offers superior gaming transfers from the latest 2×2 802.11ac Wi-Fi with all-new Multi-User MIMO (MU-MIMO) for maximum speed to every connection, M.2 and USB 3.1 for lightning-speed transfers, and RAMCache for faster game loads.

Z170I Pro Gaming also includes Sonic Radar II, a stealthy overlay that shows what opponents and teammates are up to on the battlefield — all managed via a simple control panel and customizable game list. Sonic Radar II shows both the direction and origin of key in-game sounds, enabling ASUS gamers to practice enemy-pinpointing skill.

ASUS-exclusive LANGuard’s signal-coupling technology and premium surface-mounted components ensure reliable connections and better throughput, and the LANGuard port is both electrostatically-guarded and surge-protected for 1.9X-greater tolerance to static electricity and 2.5X-greater protection against surges — all the way up to 15KV.

The new mini-ITX gaming board also includes ASUS-exclusive Pro Clock technology, a dedicated base-clock (BCLK) generator designed for 6th-generation Intel processors that allows overclocked base-clock frequencies of 400MHz[1] or even beyond. This custom solution works in tandem with the ASUS-exclusive TurboV Processing Unit (TPU) to enhance voltage and base-clock overclocking control. Boot times can be reduced, jitter is lowered and stability is increased under heavy overclocking — providing an exciting new way to boost performance to extreme heights.

Physical connectivity is also in abundance with an onboard M.2 socket with x4 PCI Express 3.0/2.0 bandwidth for up to 32Gbit/s data transfers, two USB 3.1 Gen 2 Type-A connectors for data-transfer speeds of up to 10Gbit/s — that’s twice as fast USB 3.0.

With uniquely-intelligent RAMCache technology, Z170I Pro Gaming users are able to effectively cache an entire storage device so that favorite games and apps launch at breakneck speeds — and it gets to work the moment it’s activated. RAMCache turns milliseconds into microseconds to boost game-load times to stratospheric levels, and minimizes risk of data loss. 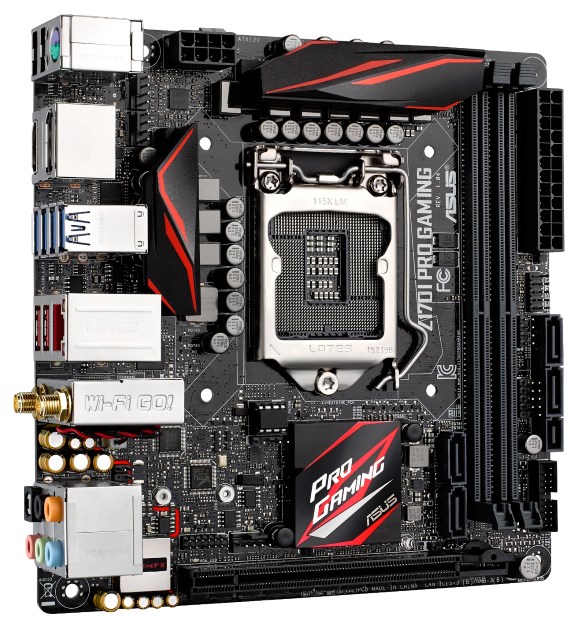