Posted on Tuesday, Sep 29 2015 @ 12:56 CEST by Thomas De Maesschalck
Logitech reveals the G410 Atlas Spectrum, a new tenkeyless mechanical gaming keyboard with Logitech's Romer-G switches. The keyboard has programmable RGB illumination and comes with Arx Control integration, which lets you display in-game information on your smartphone. The keyboard ships in October for $129.99 (149EUR).

“We worked closely with gamers of all ages and our eSports teams to create this ultra-light keyboard that is durable and comfortable,” said Ujesh Desai, vice president and general manager of gaming at Logitech. “The result is something that we think meets the needs of eSports athletes, but is also great for younger gamers looking to buy their first gaming keyboard.”

Exclusive Romer-G Mechanical Switches
The Logitech G410 Atlas Spectrum features exclusive Romer-G mechanical switches that register your key presses up to 25 percent faster than competing mechanical switches. With an actuation point of 1.5 mm, Romer-G switches receive commands more quickly, giving you an edge in competitive games where every millisecond matters. With improved durability at 70 million keystrokes, up to 40 percent longer than others on the market, you can play with confidence knowing that your keyboard can survive.

Ultra-light, Tenkeyless Design
With all the vital keys for gaming, the Logitech G410 Atlas Spectrum can be easily carried to LAN events or a friend’s house, and fits into smaller gaming spaces. Without the number pad or macro keys, you get extra space to make wide motions with your mouse. Plus, the compact design brings your hands closer together for improved comfort, which is particularly important for low DPI-gamers.

Intelligent Full Spectrum RGB Illumination
Central backlighting makes it easier to find the right keys in-game and in the dark. When paired with Logitech Gaming Software, you can individually customize the lighting in every key from a palette of 16.8 million colors. With the software you can synchronize lighting patterns across Logitech G devices, mark keys by color to keep track of spells and other commands, change colors to match your setup, or create customized game profiles. You can also control the brightness to create the perfect lighting for your gaming environment. The Logitech G410 Atlas Spectrum delivers uniform lighting coverage on the keys for a clean, readable look.

Arx Control Integration
Logitech Arx Control is a free mobile app for iOS® or Android™ that allows your mobile device to display in-game information, vital system statistics and more. The Logitech G410 Atlas Spectrum comes with an Arx Control dock ? a convenient phone or tablet stand that can be pulled out and placed anywhere on your desk ? to use while you access Arx Control. 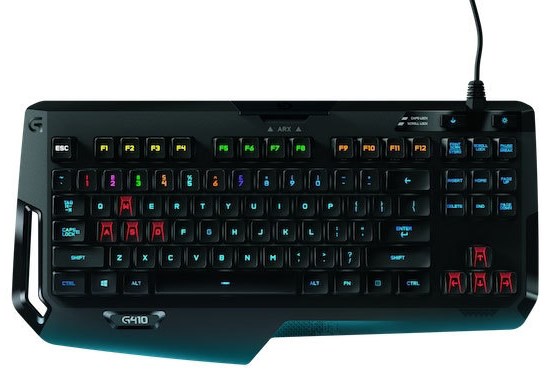