Intel announced that starting from late October, it will start shipping Skylake processors with support for its Intel Software Guard Extensions (SGX) technology. It's not exactly clear why the current Skylake processors do not support SGX, the new chips that do support it will have new S-Spec and MM numbers but will continue to use the same physical dies as existing Skylake chips.

Intel Software Guard Extensions (Intel SGX) is a set of x86 extension designed to increase the security of software through an “inverse sandbox” mechanism. In this approach, instead of trying to identify and isolate all the malware on the platform, legitimate sensitive code and data can be sealed inside an enclave and protected from attack by the malware, irrespective of the privilege level of the latter. Intel SGX needs to be supported by processors, operating systems and applications to actually work. The SGX is not something that works automatically once a chip is installed. 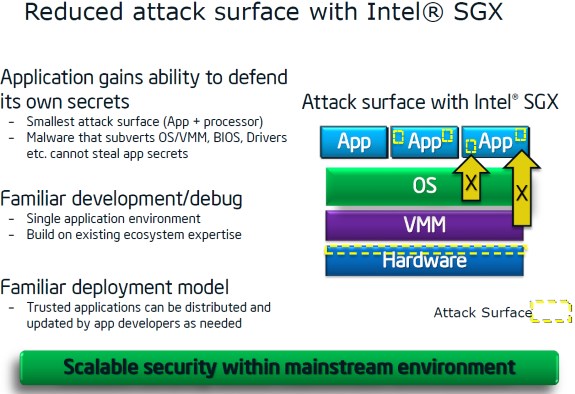