Posted on Wednesday, Oct 07 2015 @ 12:05 CEST by Thomas De Maesschalck
Looks like Razer is drifting pretty far from its gaming roots with the introduction of Razer Music, an effort to position its expensive Blade laptop as the ideal music producing platform. Razer is giving new Blade owners a free copy of FL Studio Producer Edition and is providing tutorials and insights on music production in cooperation with a number of popular producers:

Razer™, a world leader in connected devices and software for gamers, today announced the launch of Razer Music, a digital content platform featuring tutorials and insights on the future of music production.

To further enable the Razer Blade as the laptop of choice for music producers, Razer has teamed-up with Image-Line to provide FL Studio Producer Edition with the purchase of all Blade laptops. The exclusive deal is being extended to existing owners of all 2015 Blade models.

The Razer Music portal works with producers and creators, providing an easy-to-use location to share content, trade secrets and tips on music making. The site features video tutorials, as well as long form articles about music production and the technology used in the creation process. It also includes a dedicated page for each artist with music, tour dates, bios and more.

Topping the list of artists joining the initial ranks of Razer Music, deadmau5 is one of the most popular and recognizable electronic musicians in the world, best known for his intricate music production and signature mau5head. Feed Me (also known as Spor) is a producer famous for his hard-hitting electro sounds, eclectic productions and distinct visual style. Metro Boomin is a hip-hop producer best known for his work with Future, Drake, Travis Scott and Nicki Minaj. Dyro is a Dutch house producer, one of DJ Mag’s Top 30 DJs and a frequent collaborator with Hardwell, the No. 1 DJ in the world. Ean Golden is the face and creator of DJ Tech Tools, a top place for DJ gear and tech talk. A new Razer Music site will be updated regularly with content from this world-class roster, which will also include Carnage, Project 46, Varien, Heatbeat, Sandro Silva, AWE, BARE, Burns, Maor Levi, and Zircon.

What unites the artists in the Razer Music initiative is the use of the Razer Blade as their primary laptop for music production. While the Blade was designed for gamers, Razer realized that many producers were also gamers who used their Razer systems for their music production, which prompted Razer Music.

“Artists and DJs from all over the world have connected with me to discuss producing on the Razer Blade,” says Min-Liang Tan, Razer co-founder and CEO. “The power and portable form factor of our systems offers artists the performance they need, whether in the studio, on the road or onstage.” 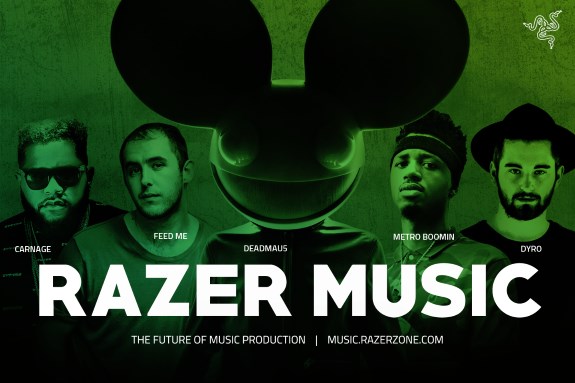