Posted on Monday, Oct 12 2015 @ 18:50 CEST by Thomas De Maesschalck
EK Waterblocks announced what I believe may be one of the first dedicated waterblocks for a solid state disk! The new EK-FC I750 SSD costs 89.95EUR and is designed for the Intel SSD 750 series PCIe SSD. It sounds a bit ridiculous but with PCIe SSDs hitting very high temperatures during stress testing there may just be a market for these products.

EK-FC I750 SSD is a Full-Cover water block for water cooling the Intel® SSD 750 Series solid-state drive. Designed in cooperation with Intel®, we followed the overall look of the original passive cooler and made sure the entire PCB is covered, thus delivering the best possible cooling performance.

The water block features a high flow design allowing it to be easily used with systems using weaker water pumps. The base is made of nickel-plated electrolytic copper while the top cover is made of stainless steel. Screw-in brass standoffs are pre-installed and allow for safe, painless installation procedure.

Enclosed is the additional EK-FC Terminal with two G1/4" threaded ports on the side . Customers might need it if there isn’t enough space to install the fittings on a regular pre-installed terminal. 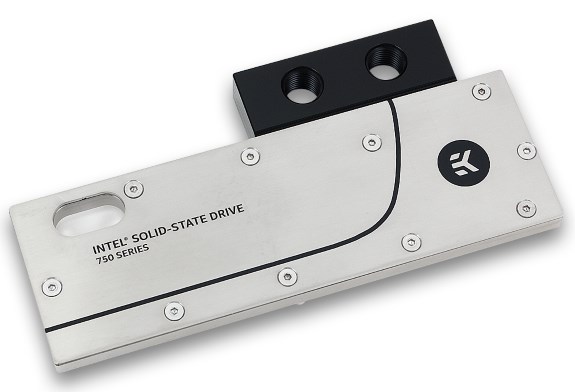