Posted on Tuesday, Oct 20 2015 @ 14:38 CEST by Thomas De Maesschalck
David Wirth has created his very own handheld railgun. Made partially from 3D-printed components, the massive gun uses parallel electrodes to fire an aluminium or graphite "armature" bullet at a speed of up to 900km/h (560mph).

The device weighs 9kg (20 pounds), it houses six capacitors and delivers 1,800 joules of energy per shot. An Arduino Uno R3 board is used to monitor charging levels, temperature and other factors.

The test shots with graphite and aluminum projectiles were far less lethal than a regular gun, as you can see in the videos below. Nevertheless, the aluminum "bullet" still put a half-inch dent in the steel-backed plywood target, and the graphite projectile "probably just vaporized," according to the Wirth. 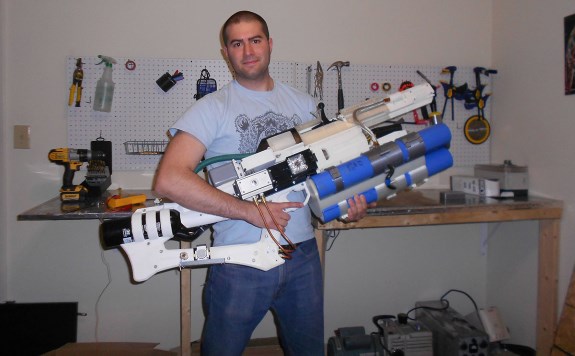