Posted on Monday, Oct 26 2015 @ 18:56 CET by Thomas De Maesschalck
Slides are making the rounds about GDDR5X, a new memory technology that promises a more cost-effective alternative to High Bandwidth Memory (HBM). The GDDR5X memory requires no major design or electrical changes, allowing GPU makers to seamlessly transition to it from GDDR5 memory.

The new memory is per-pin compatible with GDDR5 and its biggest advantage is that it offers 10-12Gbps of bandwidth, versus the 7Gbps offered by today's GDDR5 memory. Longer-term, GDDR5X could eventually reach a bandwidth of up to 16Gbps.

In a presentation by a DRAM maker leaked to the web, GDDR5X is touted as offering double the data-rate per memory access, at 64 byte/access, compared to 32 byte/access by today's fastest GDDR5 standard, which is currently saturating its clock/voltage curve at 7 Gbps. GDDR5X breathes a new lease of live to the ageing DRAM standard, offering 10-12 Gbps initially, with a goal of 16 Gbps in the long term. GDDR5X chips will have identical pin layouts to their predecessors, and hence it should cost GPU makers barely any R&D to implement them.

GDDR5X will be mass produced by firms like Micron and according to the rumor mill, both AMD and NVIDIA are considering adopting it. It seems the high-end GPUs will get HBM2 whereas mid-stream and performance cards will transition to GDDR5X to keep costs down. 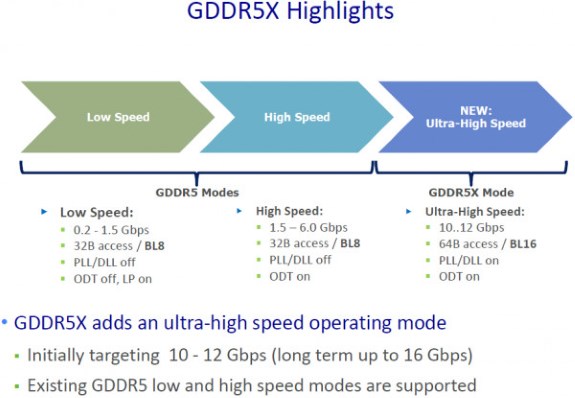 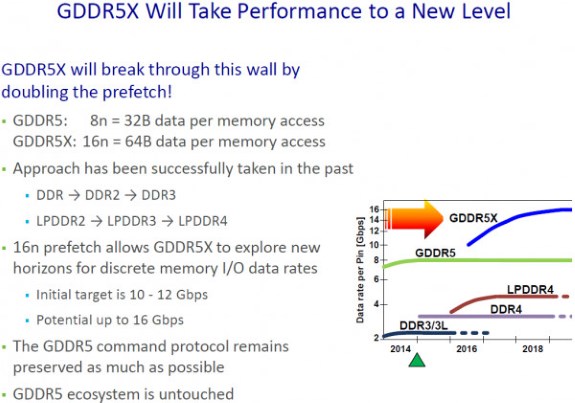