Posted on Tuesday, Oct 27 2015 @ 13:37 CET by Thomas De Maesschalck
One of the interesting aspects of DirectX12 is that this new API finally delivers multi GPU rendering unlike anything we've seen before, allowing you to mix-and-match graphic cards from different vendors. The recently published alpha version of Ashes of the Singularity is not only one of the first DirectX 12 games but also the first demo for the new DX12 multi-GPU Explicit Multi-Adapter (AKA Multi Display Adapter) functionality.

Attempts to achieve this in the past didn't live up to expectations, so it's quite interesting to see how Oxide's early implementation of this new DX12 feature works. You can view the results from AnandTech's benchmarking session over here, despite this being in alpha phase it looks pretty impressive. The technology works marvelously and delivers pretty impressive scaling, but the downside is that it has to be implemented by the game developers, and it remains to be seen how enthusiastic AMD and NVIDIA will be about supporting this threat to CrossFire and SLI.

Seeing as this build of Ashes is a tech demo, I’m hesitant to read too much into the precise benchmark numbers we’re seeing. That said, the fact that the fastest multi-GPU setup was a mixed AMD/NVIDIA GPU setup was something I wasn’t expecting and definitely makes it all the more interesting. DirectX 11 games are going to be around for a while longer yet, so we’re likely still some time away from a mixed GPU gaming setup being truly viable, but it will be interesting to see just what Oxide and other developers can pull off with explicit multi-adapter as they become more familiar with the technology and implement more advanced rendering modes. 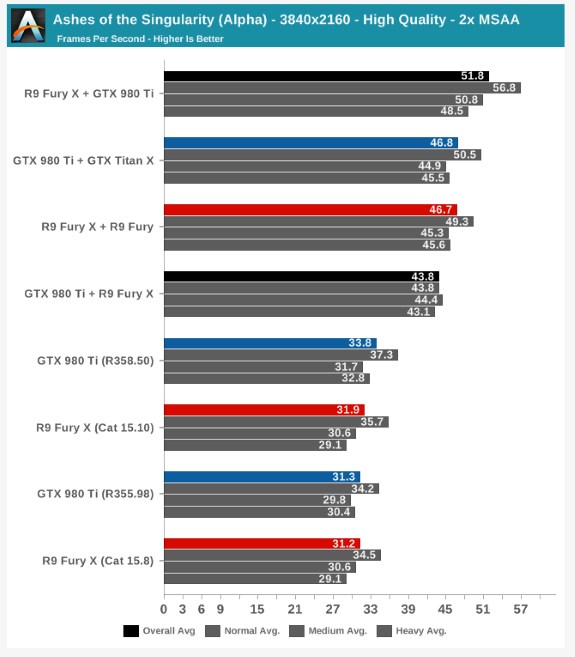