Posted on Thursday, Oct 29 2015 @ 14:34 CET by Thomas De Maesschalck
Intel CEO Brian Krzanich demonstrated the upcoming 3D XPoint memory technology at Oracle's OpenWorld conference. The chip giant will commercialize this new memory technology under the "Optane" brand, it promises to be capable of delivering 1,000 times the performance of NAND flash, 1,000 times the endurance of NAND flash, and about 10 times the density of DRAM.

The first Optane SSDs start shipping sometime in 2016 and Intel demonstrated the performance of one of these NVMe disks in a standard 1U server and ran two Oracle benchmark tests using Oracle’s clone of Red Hat’s Enterprise Linux.

Compared to an Intel P3700 NAND flash SSD, the Optane SSD delivered 4.42x higher IOPS performance and 6.44x better latency in the first test, and 7.13x higher IOPS and 8.11x better latency in the second test. Quite impressive results and Krzanich also promised Optane would provide about 200x less variability, with this he probably means Optane will feature a more constant average latency than NAND flash.

Intel also revealed a mechanical model of an Optane DIMM but it's not clear when these products will start shipping. The Optane DIMM plugs into the same sockets as DDR4 memory and promises to take performance to a new level:

Krzanich said that Intel will have working Optane DIMMs ready later this year for early testers, and will combine the performance of DRAM with the capacity and cost of flash. What this means is that a mix of DDR4 and Optane DIMMs in a two-socket server with a total of 6 TB of addressable memory, “virtually eliminating paging between memory and storage, taking performance truly to a whole new level.” Krzanich added that data encryption in the DIMM, so that data at rest on the DIMM – it will take us all a while to get used to that – is secured. 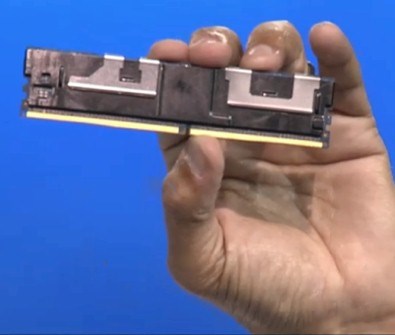