Last month PC Perspective discovered NVIDIA's GPUs suffer from a bug that dramatically increases idle power consumption with high refresh rates. Ryan Shrout's tests revealed power consumption remained relatively stable until 120Hz, but shot up from around 76W to nearly 134W when going to a refresh rate of 144Hz. And it didn't stop there, at 165Hz he measured peak power draws of up to 201W.

NVIDIA confirmed the existence of the bug and promises to fix it in an upcoming driver:

We put NVIDIA on notice with the story and followed up with emails including more information from other users as well as additional testing completed after the story was posted. The result: NVIDIA has confirmed it exists and has a fix incoming!

In an email we got from NVIDIA PR last night:

We checked into the observation you highlighted with the newest 165Hz G-SYNC monitors.

Guess what? You were right! That new monitor (or you) exposed a bug in the way our GPU was managing clocks for GSYNC and very high refresh rates.

As a result of your findings, we are fixing the bug which will lower the operating point of our GPUs back to the same power level for other displays.

We’ll have this fixed in an upcoming driver. 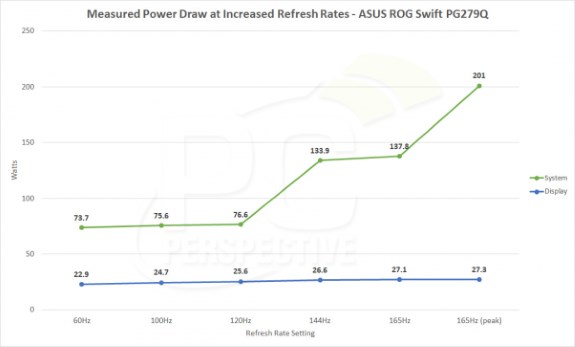