NVIDIA showcases the Jetson TX1, a new ARM-based mini computer designed for artificial intelligence projects including autonomous robots and drones. The board features 64-bit ARM A57 CPUs and a 256-core NVIDIA Maxwell-based GPU capable of delivering 1 teraflops of computing power. The developer kit can be pre-ordered for $599, the credit card-sized module itself it expected to ship in early 2016 for $299.

NVIDIA (NASDAQ: NVDA) today unveiled a credit-card sized module that harnesses the power of machine learning to enable a new generation of smart, autonomous machines that can learn.

The NVIDIA® Jetson™ TX1 module addresses the challenge of creating a new wave of millions of smart devices -- drones that don't just fly by remote control, but navigate their way through a forest for search and rescue; compact security surveillance systems that don't just scan crowds, but identify suspicious activity; and robots that don't just perform tasks, but tailor them to individuals' habits -- by incorporating capabilities such as machine learning, computer vision, navigation and more.

Jetson TX1 is the first embedded computer designed to process deep neural networks -- computer software that can learn to recognize objects or interpret information. This new approach to program computers is called machine learning and can be used to perform complex tasks such as recognizing images, processing conversational speech, or analyzing a room full of furniture and finding a path to navigate across it. Machine learning is a groundbreaking technology that will give autonomous devices a giant leap in capability.

With its 1 teraflops of performance -- comparable to the fastest supercomputer from 15 years ago -- Jetson delivers exceptional performance for machine learning, computer vision, GPU computing and graphics, while drawing very little power.

"Jetson TX1 will enable a new generation of incredibly capable autonomous devices," said Deepu Talla, vice president and general manager of the Tegra business at NVIDIA. "They will navigate on their own, recognize objects and faces, and become increasingly intelligent through machine learning. It will enable developers to create industry-changing products."

Available as a module, Jetson TX1 is also built into a Developer Kit, which enables hobbyists and professionals to develop and test highly advanced autonomous devices. This makes it easy to transition from development to manufacturing and production.

Industry Support
Ovum Principal Analyst Michael Azoff said: "Jetson TX1 is a significant advance in moving machine learning applications from research into the real world. It has uses that range from artificial intelligence-assisted robots, to advanced systems in automobiles, and to Internet of Things-connected intelligent machines. The ecosystem around Jetson will accelerate the transfer of AI from lab to real-world machines."

Sertac Karaman, professor of aeronautics and astronautics at the Massachusetts Institute of Technology, said, "NVIDIA's Jetson TX1 is so powerful and easy to use, we decided to base MIT's robotics systems and science course around it. Our students will use TX1 for embedded vision, stereo reconstruction and machine learning, so their scale racecars will be able to detect and avoid obstacles. I'm excited with the possibilities that Jetson offers."

Jeff Bier, president of Berkeley Design Technology, Inc., said: "Based on BDTI's independent analysis, the Jetson TX1 stands out in three respects. First, developing applications on the Jetson TX1 feels more like developing on a PC than like developing on a typical embedded board. Second, the JetPackTX1 installer makes it easy to install a system image on the board. Third, support for CUDA enables developers to use the GPU to accelerate their applications without having to delve into the complexities of GPU programming."

Key features of Jetson TX1 include: 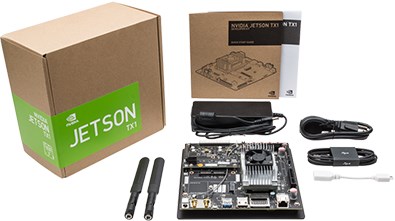