NVIDIA talked about its Pascal chip at its Graphics Technology Conference (GTC) in Japan. The graphics chip firm said its newest architecture will be made on a 16nm FinFET proces and promised to deliver double the performance/Watt over the current Maxwell-based chips. For comparison, the rumor mill claims AMD's next-gen GPU will also offer about twice the performance per Watt over the current generation.

As you may know, Pascal jumps straight to HBM2 and it seems flagship consumer version of the chip will feature four 4GB HBM2 stacks, resulting in a total of 16GB of HBM2 on the next Titan-level card. Workstation and supercomputer-oriented cards like the Quadro and Tesla on the other hand will get support for up to 32GB HBM2.

Speaking about supercomputing and other high-performance applications, the Pascal architecture will introduce support for NVLink, a faster interconnect method:

NVIDIA is innovating a new interconnect called NVLink, which will change the way the company has been building dual-GPU graphics cards. Currently, dual-GPU cards are essentially two graphics cards on a common PCB, with PCIe bandwidth from the slot shared by a bridge-chip, and an internal SLI bridge connecting the two GPUs. With NVLink, the two GPUs will be interconnected with an 80 GB/s bi-directional data path, letting each GPU directly address memory controlled by the other. This should greatly improve memory management in games that take advantage of newer APIs such as DirectX 12 and Vulkan; and prime the graphics card for higher display resolutions.

NVIDIA is expected to ship its first Pascal-based GPUs in the first half of 2016. 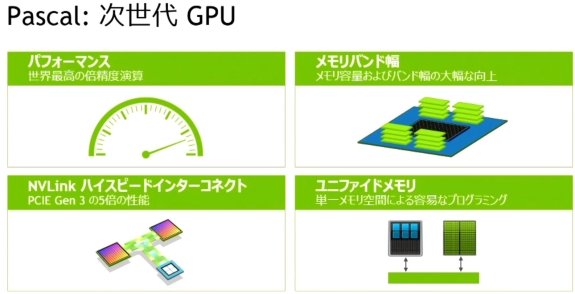