NVIDIA predicts supercomputing will be everywhere

Over at the SC15 conference in Austin, Texas, NVIDIA CEO Jen-Hsun Huang banged the drum about the widespread adoption of supercomputing in a wide variety of industries. Huang explained supercomputing technology is moving well beyond traditional supercomputer systems, and said GPU technology will be part of future tech like autonomous cars and personal robot assistants. NVIDIA products that focus on these fields include the NVIDIA Drive PX car computer and the Jetson TX1 module for machine learning.

Over the last couple of years, GPUs have found their way in many of the newest supercomputers. NVIDIA claims the use of GPU accelerators in supercomputers in the top500 list is growing at a rate of 50 percent a year, and said its Tesla GPUs are in 23 of 24 new accelerated supercomputers.

In the future machine learning will increase demand for GPUs even further. Machine learning is "high performance computing's first killer app for consumers," thinksHuang. This technology allows technology to become autonomous in the complex real world and will be instrumental to the production of autonomous vehicles and machines such as personal care robots. 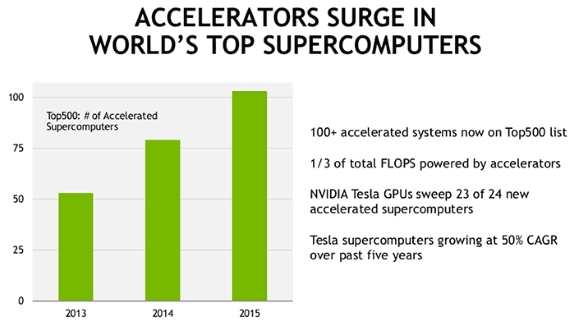