Samsung pulls in almost one third of NAND flash revenue

Posted on Wednesday, Dec 02 2015 @ 13:18 CET by Thomas De Maesschalck
DRAMeXchange published a new report about the latest trends in the branded NAND flash memory market. The company found that shipments in Q3 2015 hit $8.5 billion, a quarter-over-quarter growth of 2.4 percent due to a combination of weak demand and rapidly dropping prices. Samsung is the single largest NAND flash maker, the company pulls in 31.5 percent of global NAND flash revenue, followed by Toshiba at 20.5 percent and SanDisk at 15.4 percent. Full details at StorageNewsLetter.

Sean Yang, assistant VP of DRAMeXchange, said demand was uncharacteristically weak in the third quarter and did not adhere to the seasonal pattern. NAND flash end demand was below expectations due to macroeconomic factor. This resulted in oversupply and sharp price decline in the NAND flash market, putting heavy pressures on NAND flash suppliers' revenue growth and margins. DRAMeXchange expects the suppliers' revenue situation to remain difficult during the fourth quarter because of the persisting oversupply problem. 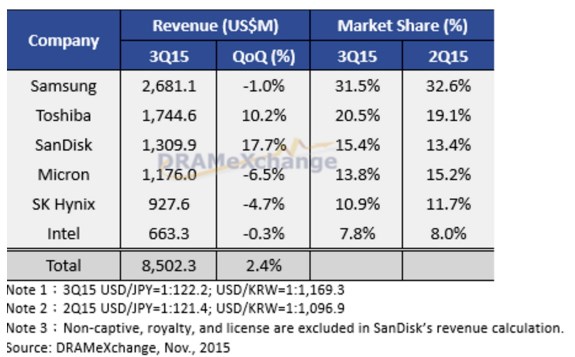