Micron confirms GDDR5X is coming in 2016

Posted on Tuesday, Dec 15 2015 @ 13:01 CET by Thomas De Maesschalck
TweakTown received confirmation from Micron that GDDR5X is coming in 2016 and that this memory is not the same as GDDR6. GDDR5X will be used by many new video cards in 2016, it's not going to be as fast as HBM2 but will offer better cost efficiency.

They continued, adding that "GDDR5X and GDDR6 are not the same product and Micron has not announced any plans involving GDDR6". This fully clears things up for not only us, but the world. We will see GDDR5X released onto video cards next year, allowing for much higher memory bandwidth - and while it won't be high as HBM1 or HBM2, it will be significantly higher than the normal GDDR5 we have today. 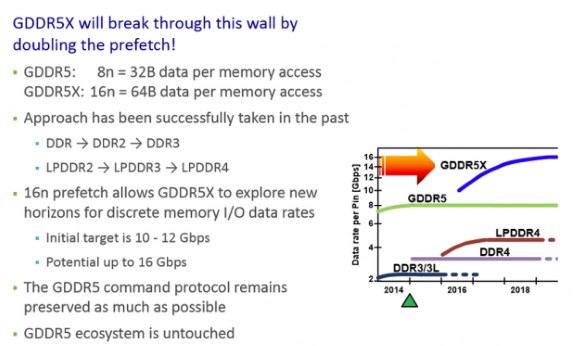