AMD's Radeon Technologies Group announced it's rolling out GPUOpen, this project will be released in January on GitHub under a MIT license and aims to counteract NVIDIA's GameWorks.

AMD is basically giving game developers unlimited access to its APIs and SDKs, allowing them to more easily implement and optimize effects and libraries like TressFX and LiquidVR because they can now fully examine, modify, improve and redistribute the source code for commercial purposes. Full details at PC Perspective.

Starting in January AMD will enable access to the GPUOpen software stack on GitHub with the following set of tools and effects to get things jumpstarted. There isn’t anything in this table that is new but there is plenty that is interesting and useful to game developers. TressFX has been successfully implemented and the various Fire-based SDKs look impressive in the demonstrations that I’ve seen. LiquidVR is definitely going to be a big part of the movement to virtual reality with many high-level developers telling me that its implementation of low latency rendering pathways has advantages over the GeForce products. 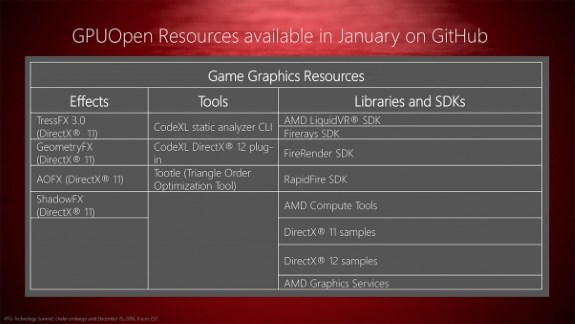 Linux gamers will also be glad to hear that AMD is planning to revitalize its Linux support, with broader distro support and faster implementation of new features.