Posted on Thursday, January 21 2016 @ 14:19 CET by Thomas De Maesschalck
Back when I was young we used to have nine planets in our solar system but after the discovery of numerous dwarf planets Pluto lost its status as a planet. There has long been speculation about another big planet in the outskirts of our solar system and now a team of astronomers claim there may indeed by a ninth planet.

This is not a Niburu-like theory, the evidence comes from Konstantin Batygin and Mike Brown of the California Institute of Technology (Caltech). Ironically, Brown is sometimes nicknamed "Planet Slayer" because his 2005 discovery of Eris resulted in the demotion of Pluto.

While not directly observed, the study of the orbit of six objects in the Kuiper belt provides strong evidence that a yet undiscovered planet is keeping these space rocks into orbits perpendicular to the planet of the solar system and oriented at right angles to "Planet Nine".

If the sums are right, there may be ninth planet located 200 times as far as the Earth's distance from the Sun. The planet is expected to be ten times more massive than Earth and up to four times the size. The astronomers calculated Planet Nine moves on an extremely elongated orbit, taking 10,000 to 20,000 years to complete an orbit around the sun.

“One very interesting thing is that the planet is predicted to be between Earth and Neptune in mass. We see lots of planets this size in our surveys of planets elsewhere in the galaxy, and it’s been something of a mystery as to why our solar system doesn’t have its own version of this very common planet type,” he added.

Due to its large size, sensitive enough telescopes should be able to observe Planet Nine. The Subaru telescope in Hawaii already started the search and Brown says he'll be surprised if the planet isn't found in the next five years. 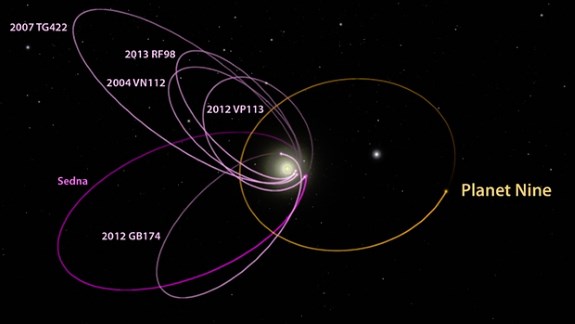