Posted on Monday, Feb 01 2016 @ 13:31 CET by Thomas De Maesschalck
The Verge reports the MIT team was awarded the top prize in SpaceX's Hyperloop design competition. The Hyperloop is a new form of high-speed, land-based transportation envisioned by Elon Musk, the founder of Tesla and SpaceX.

The Hyperloop promises to deliver fast city-to-city travel by transporting people and goods via pods inside reduced-pressure tubes. Musk envisions this "fifth mode of transportation" could shorten the 400-mile (643km) journey time between Los Angeles and San Francisco to just 35 minutes, but critics believe the concept will be too costly and/or impractical.

The idea has been going around for a couple of years and now the MIT team (as well as other teams) will go on to build an actual pod to test the concept on the under-construction Hyperloop track near SpaceX's headquarters in Hawthorne, California.

Musk first unveiled plans for "a fifth mode of transportation" in August 2013 in a white paper published on the SpaceX website. Under the plans, the Hyperloop would transport passengers in aluminum pods traveling as fast as 760 mph, mostly following the route of California's I-5. The estimated cost would be $6 billion for the passenger-only model, or $7.5 billion for a larger model capable of transporting freight. 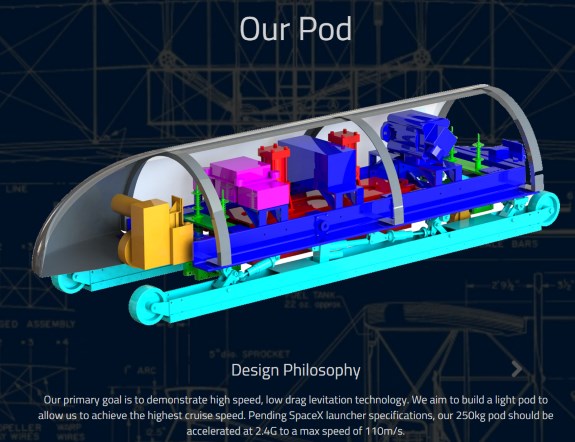