Micron presented a next-generation 768Gbit triple-bit-per-cell (TLC) NAND flash memory design at last week's International Solid-State Circuits Conference (ISSCC). The 768Gb 3D NAND device from Micron has a density of 4.29Gb/mm2 compared to 2.6Gb/mm2 for the most dense 256Gbit 3D NAND chips that Samsung ships today, and four times as much as most planar devices available on the market today.

The company has not yet decided whether it will commit to manufacturing the design as a product. The product would have a chip die size of 179.2mm², read speeds of up to 800MB/s and write speed of 44MB/s. This compares to a die size of 97.6mm² for the Samsung device, which has a read speed of 178MB/s but a write speed of 53MB/s.

Given the four-to-one ratio of Micron’s density compared to today’s planar devices, the company can afford to spend a lot on the new product and still make a profit, Harari said. However, he noted it may require the equivalent of a new fab.

The Micron part gets its density from a technique of tucking control circuitry under the array pioneered years ago by Matrix Semiconductor and used by several companies including SanDisk, he added.

“Micron is bold in designing this chip whether they can yield it is another matter,” Harari said. 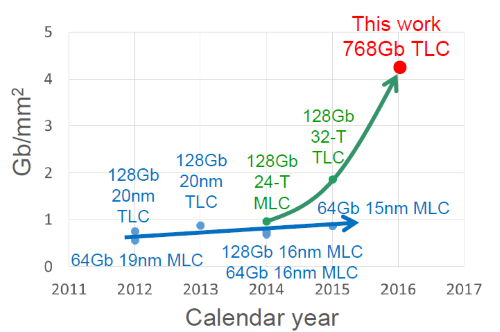