Enter a World of Assassination. You are Agent 47, the world’s ultimate assassin. The game is designed to end you – get AMD in your arsenal and arm yourself with cutting-edge support for DirectX® 12 and the latest 4K gaming.

Anticipated release date for “Hitman” is March 11, 2016 (actual release date will vary by country); although game releases may be delayed for reasons that are out of the control of AMD. Visit https://hitman.com for more information. The game code will provide access to the Hitman beta through Steam starting on February 19, 2016. Hitman Beta provides access to the Prologue area, but doesn't include Contracts Mode, Escalations Mode or any other live events. The full game will be released on Steam on March 11, 2016 and provides access to all locations, all live content, Contracts Mode, and additional game updates. The full game will appear in the end user’s Steam account on the day of game release. 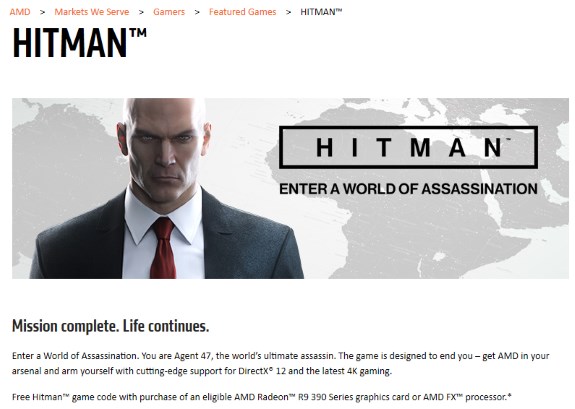