Eurocom is launching the Sky X9E Extreme Edition unlocked, high performance “desktop Laptop” with Intel Core i7-6700K, NVIDIA GeForce GTX 980, 64 GB DDR4 memory and a beautiful 4K 17.3” display. Eurocom customers now have an ultra-high performance, fully upgradeable mobile platform that they have utmost freedom to control and to push it to the limits.

Equipped with the most powerful components ever assembled in a laptop form factor and now with the unlocked capability to push the performance to otherworldly levels. Eurocom provides an unlocked BIOS along with an Overclocking Seminar with overclocking expert Mr. Fox so users have a quick rundown on how to best push their new EUROCOM Sky X9E to the limits as well as setting limitations and safe guards for safe operation.

“Eurocom is all about freedom, freedom to choose the components of your upgradeable, custom built laptop and now users have the freedom to control the performance with an unlocked, Intel Core i7 6700K and NVIDIA GeForce GTX 980 equipped EUROCOM Sky X9E Desktop Laptop.” Eurocom President Mark Bialic.

The EUROCOM Sky X9E is Virtual-reality ready, the beefy hardware of the Sky X9E blows away the minimum specs you will need to run the incredibly immersive experience and 360 degrees games and videos with an Oculus Rift of HTC Vive.

The EUROCOM Sky X9E is the unlocked edition of the X9 chassis and supports the latest, BIOS unlocked 6th generation Intel Core i7 processors up to 6700K due to the desktop Z170 chipset and LGA 1151 CPU socket. Four SODIMM are supported for up to 64 GB DDR4 2400 and 2133 memory to pair with a high performance, unlocked desktop i7 processor.

The EUROCOM Sky X9E is the most powerful laptop ever made. It is a completely user-upgradeable, fully customizable and extremely flexible, allowing the Sky X9E to be configured with a variety of options including NVIDIA GeForce graphics and high performance desktop socket processors. The EUROCOM Sky X9E has mission critical reliability and super computer performance with quality to last and upgradeability to improve capability along the way.

To display the exquisite graphics supported in the Sky X9E we fitted it with a high pixel density 4K Ultra HD matte IPS display with a whopping 8,294,400 pixels.

The EUROCOM Sky X9E M.2 PCIeX4 SSD storage allows enthusiast users to super-charge productivity and creativity of workflows. The Sky X9E utilizes the new NVMe protocol, designed from the ground up to take advantage of pipeline-rich, random access based storage.

“This machine (EUROCOM Sky X9E) is by no means the first example of an extreme performance notebook capable of insane overclocking, but I think it might be the best quad-core beast for the job” said Mr Fox.

The EUROCOM Sky X9E is full upgradeable and customizable, customers can choose between a variety of components. 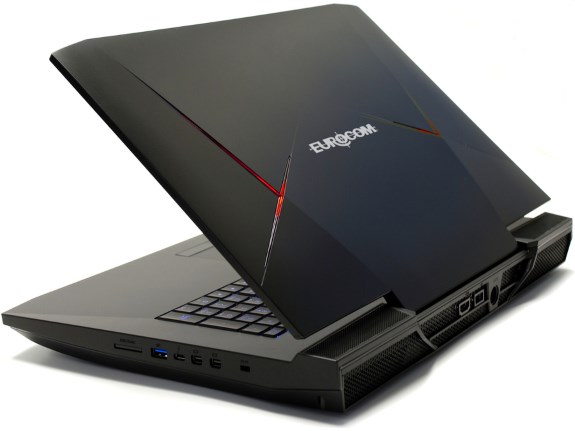