Posted on Tuesday, Mar 01 2016 @ 12:57 CET by Thomas De Maesschalck
Microsoft is now taking pre-orders for its HoloLens development kit, it's available exclusively to "accepted applicants" and costs $3,000. To purchase this augmented reality development kit, you need to be a developer in the US or Canada and need to participate in the Windows Insiders program.

The development kit includes the HoloLens, a carrying case, a charger and a Clicker that lets yu select, scroll, hold, and double-click during interactive scenarios. A copy of HoloStudio is also included, this software tool lets developers build 3D content using the HoloLens headset itself. The first wave of shipments should arrive by March 30th, 2016.

Here is a bit of information about how the HoloLens functions. It has see-through holographic lenses (waveguides), two HD 16:9 light engines, automatic pupillary distance calibration, a 2.3MP holographic resolution and a holographic density of over 2.5k radiants.

Unlike the wave of VR headsets hitting us in the coming weeks/months, the HoloLens is a self-contained device, it does not require a PC or a console to function. The hardware specifications reveal the HoloLens is based on a 32-bit architecture from Intel, not a lot of details are shared but Microsoft explains that in addition to the CPU and GPU, the HoloLens features a custom-made Microsoft Holographic Processing Unit (HPU). This custom chip is designed to efficiently handle the large amound of data from the sensors, to analyze your gestures and to map the world all around you in real-time.

Windows 10 is the device's operating system and it features 64GB internal flash memory, 2GB RAM, 802.11ac WiFi, built-in speakers and a wide variety of sensors to capture information about what you're doing and the environment you're in. The headset weighs 579g but has a battery life of only 2 to 3 hours of active use.

An overview of some of the capabilities of the HoloLens can be seen in the video clip below. 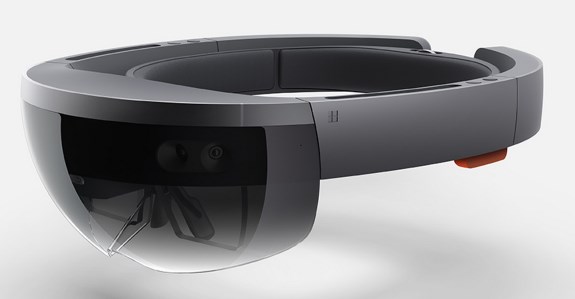