Posted on Tuesday, Mar 01 2016 @ 13:51 CET by Thomas De Maesschalck
Jon Peddie's new report about the discrete graphics card market just arrived. The company reports the total number of add-in board cards sold in 2015 was 44 million, down from 50 million the year before, but the good news is that sales of enthusiast-level video cards rose from 2.9 million in 2014 to a staggering 5.9 million units in 2015.

As a whole, the add-in board market fell 7.9 percent in Q4 2015 versus the year before, which is less than the 10.37 percent drop suffered by the desktop PC market. The report mentions the attach rate of discrete video cards has declined from a high of 63 percent in Q1 2008 to 37 percent in Q4 2015.

Looking at the marketshare figures, we can see that AMD recaptured a bit of marketshare from NVIDIA in the final quarter of 2015. NVIDIA supplied 78.8 percent of the market in Q4 2015, down from 81.1 percent the quarter before, while AMD rose from 18.8 percent to 21.1 percent.

That rise in enthusiast AIB shipments, while the PC and overall AIB market was declining, was due to the great new games that were brought out in 2015. And, even though neither AMD or Nvidia introduced any killer new AIBs in 2015, sales went up. This is paramount proof that the enthusiasts and their followers want, and will pay for great games and hardware if it is compelling.

The high-end gamer AIBs were the bright spot in the PC market in 2015, and especially in Q4’15.

Our estimated PC graphics add-in-board (AIB) shipments and suppliers’ market share for Q4'15 is shown in the following table.

JPR’s AIB Report tracks computer add-in graphics boards, which carry discrete graphics chips. AIBs used in desktop PCs, workstations, servers, and other devices such as scientific instruments. They are sold directly to customers as aftermarket products, or are factory installed. In all cases, AIBs represent the higher end of the graphics industry using discrete chips and private high-speed memory, as compared to the integrated GPUs in CPUs that share slower system memory.

The news was discouraging and not seasonally understandable, quarter-to-quarter, the AIB market decreased -4.9% (compared to the desktop PC market, which increased 2.0%).

AIB shipments during the quarter decreased -4.9%, which is below the ten-year average, of 4.7%.

On a year-to-year basis, we found that total AIB shipments during the quarter fell -7.9%, which is less than desktop PCs, which fell -10.37%.

However, in spite of the overall decline, somewhat due to tablets and embedded graphics, the PC’s gaming momentum continues to build and is the bright spot in the AIB market.

The overall PC desktop market increased quarter-to-quarter including double-attach—the adding of a second (or third) AIB to a system with integrated processor graphics—and to a lesser extent, dual AIBs in performance desktop machines using either AMD’s Crossfire or Nvidia’s SLI technology.

The AIB market now has just four chip (GPU) suppliers, who also build and sell AIBs. The primary suppliers of GPUs are AMD and Nvidia. There are 48 AIB suppliers, the AIB OEM customers of the GPU suppliers, which they call “partners.”

In addition to privately branded AIBs offered worldwide, about a dozen PC suppliers offer AIBs as part of a system, and/or as an option, and some that offer AIBs as separate aftermarket products. We have been tracking AIB shipments quarterly since 1987—the volume of those boards peaked in 1999, reaching 114 million units, in 2013 65 million shipped.

This detailed 60-page report will provide you with all the data, analysis and insight you need to clearly understand where this technology is today and where it's headed. 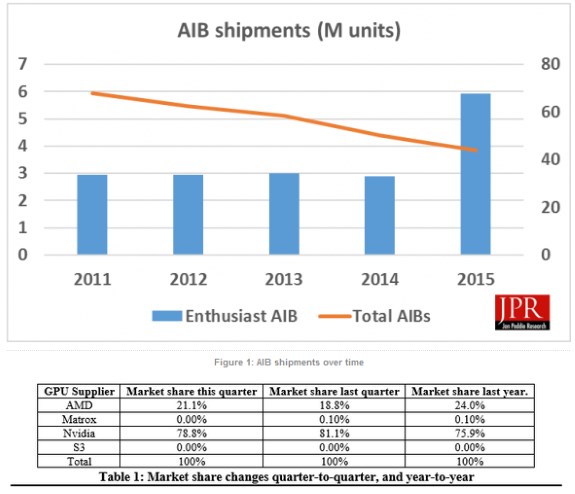