Posted on Thursday, Mar 03 2016 @ 13:07 CET by Thomas De Maesschalck
Samsung announces world's largest solid state disk. The new PM1633a is aimed at datacenter applications and offers a storage capacity of 15.36TB, it has a 2.5" form factor and uses the SAS 12Gbps interface. Inside the PM1633a is Samsung's 48-layer 3D V-NAND flash memory, the disk features 32 flash packages of 512GB.

First revealed at the 2015 Flash Memory Summit in August, the 15.36TB SSD is based on a 12Gb/s Serial Attached SCSI (SAS) interface, for use in enterprise storage systems. Because the PM1633a comes in a 2.5-inch form factor, enterprise storage managers can fit twice as many of the drives in a standard 19-inch, 2U rack, compared to an equivalent 3.5-inch storage drive.

“To satisfy an increasing market need for ultra-high-capacity SAS SSDs from leading enterprise storage system manufacturers, we are directing our best efforts toward meeting our customers’ SSD requests,” said Jung-bae Lee, Senior Vice President, Memory Product Planning and Application Engineering Team, Samsung Electronics. “We will continue to lead the industry with next-generation SSDs, using our advanced 3D V-NAND memory technology, in order to accelerate the growth of the premium memory market while delivering greater performance and efficiency to our customers.”

The unprecedented 15.36TB of data storage on a single SSD is enabled by combining 512 of Samsung’s 256Gb V-NAND memory chips. The 256Gb dies are stacked in 16 layers to form a single 512GB package, with a total of 32 NAND flash packages in the 15.36TB drive. Utilizing Samsung’s 3rd generation, 256-gigabit (Gb) V-NAND technology which stacks cell-arrays in 48 layers, the PM1633a line-up provides significant performance and reliability upgrades from its predecessor, the PM1633, which used Samsung’s 2nd generation, 32-layer, 128Gb V-NAND memory.

Samsung’s new PM1633a SSD provides the opportunity for significant improvements in the efficiency of IT system investments through its high storage capacity and exceptional performance. These performance gains stem from Samsung’s latest vertical NAND (V-NAND) flash technology, as well as the company’s proprietary controller and firmware technology.

The 15.36TB PM1633a drive supports 1 DWPD (drive writes per day), which means 15.36TB of data can be written every day on this single drive without failure, a level of reliability that will improve cost of ownership for enterprise storage systems. This drive can write from two to ten times as much data as typical SATA SSDs based on planar MLC and TLC NAND flash technologies.

Further, the drive boasts a highly dependable metadata protection mechanism in addition to featuring a data protection and restoration software tool in case of a momentary blackout, which make enterprise systems more stable and manageable.

Starting with the 15.36TB density, Samsung will provide a wide range of capacity options in its PM1633a SSD line-up – 7.68TB, 3.84TB, 1.92TB, 960-gigabyte (GB) and 480GB later this year. With more choices in storage capacity, Samsung is reinforcing the competitiveness in its SAS SSD line-up. The Samsung PM1633a SSD line-up is expected to rapidly become the overwhelming favorite over hard disks for enterprise storage systems. 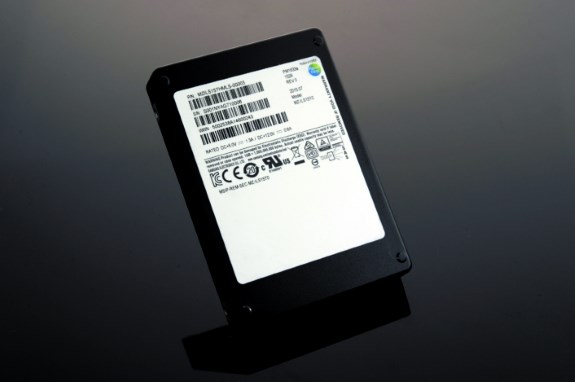