Not a lot of details were revealed about AMD's Polaris architecture at yesterday's Game Developer Conference (GDC) event but the company did show a somewhat vague roadmap showing what's in store for the next couple of years.

The slide below reveals AMD's current plans for the GPU market until 2019. The next-gen Polaris GPU will be made on a 14nm FinFET process, it will arrive later this year and promises a 2.5x increase in performance/Watt. Probably the biggest shocker is that the slide suggests Polaris will not be using the new HBM2. AMD is leaving a lot to speculate about but it seems Vega will be the first architecture to adopt HBM2, implying Polaris will stick with HBM or possibly adopt GDDR5X memory.

Vega is expected to arrive relatively short after Polaris, the slide suggests a launch in early 2017 and a performance/Watt improvement of around 50 percent. Sometime around early 2018 we can expect the launch of Navi, this architecture will adopt a next-gen memory technology and seems to promise about a 2.5x performance/Watt increase versus Polaris. 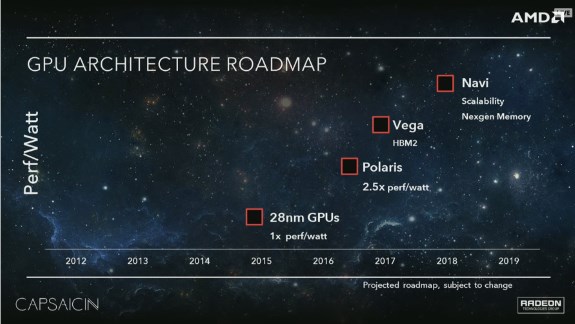