Posted on Friday, Mar 18 2016 @ 15:04 CET by Thomas De Maesschalck
Oculus announced a total of 30 virtual reality games will be available when its Rift headset becomes available on March 28th. There are a couple of big names on the list but also a bunch of low-cost titles. Those who pre-ordered the Rift headset get EVE: Valkyrie and Lucky's Tale for free. 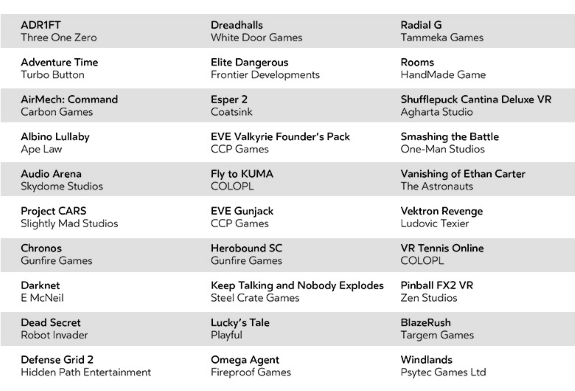 "I wish I could come up on this stage and tell you that virtual reality is going to change everything, it's all going to be for the better, nobody is going to fail and you're going to make so much money if you get involved in virtual reality," the 23 year old told the audience. "The actual truth is that we don't know how things are going to play out. We know there are going to be a lot of successes, but the likelihood is that there are also going to be a lot of failures, it's really the same of anyone else in the games industry. There's a lot of optimism, but the rubber hasn't really hit the road yet."