Posted on Monday, Mar 21 2016 @ 14:38 CET by Thomas De Maesschalck
Arovia wowed crowds with its SPUD concept at South By Southwest Festival (SXSW). That's short for Spontaneous Pop-Up Display and that's exactly what this product is, it's a 24-inch screen designed to be very portable so you can take it out of your backpack whenever you need it.

One disappointing aspect perhaps is that it's not based on the foldable display technology we've been hearing about for many years. Instead, the SPUD uses some sort of rear-projection technology in combination with a special vinyl composite screen that promises exception contrast and clarity. The screen connects wirelessly (WiDi) or via HDMI to a phone, tablet or laptop.

Wesley received funding to develop the idea through a National Science Foundation accelerator grant while at Rice University in Houston. He developed the idea after traveling extensively for his job as a product manager and being frustrated by not having enough screen room to work with Powerpoint and Excel documents in his hotel room.

It is certainly an interesting idea and I'm curious how the SPUD will score in terms of image quality and usability. 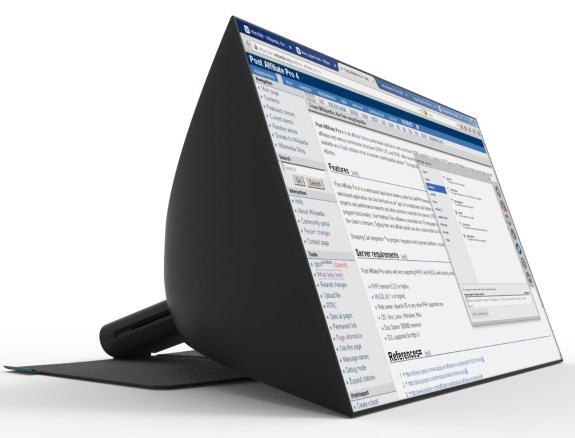