Posted on Wednesday, Mar 23 2016 @ 14:48 CET by Thomas De Maesschalck
Microsoft is close to finishing the Shader Model 6.0 update for the Direct3D API. This new model will provide a more optimized pathway for shader code to make its way to the GPU. It will replace Shader Model 5.0, which remained largely unchanged since the introduction of DirectX 11 in 2009.

One key difference versus Shader Model 5.0 is that whereas this old model relies on the fxc compiler to both compile and optimize the code, the new model adopts a Clang HLSL compiler and direct optimization to multiple LLVM passes.

Since Shader Model 6.0 supports HLSL code from v5.0 upwards, it should also benefit existing DirectX 11 and DirectX 12 apps, while relegating older apps to the then legacy Shader Model 5.0 pathway. In addition, Shader Model 6.0 claims to provide the right performance to cope with API level features such as tiled resources (mega-textures). It remains to be seen how Microsoft deploys Shader Model 6.0. 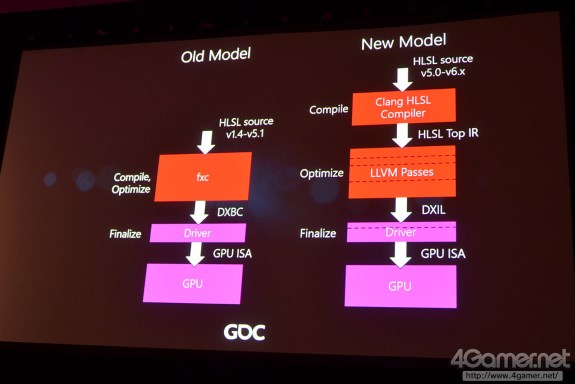