NVIDIA Tesla P100 GPU to be a 15.3 billion transistor beast

NVIDIA revealed details about its Tesla P100 GPU at the GPU Technology Conference. This future Pascal-based GPU will be made on a 16nm FinFET process and features a whopping 15.3 billion transistors in a 610mm² die. It wil feature Chip on Wafer on Substrate (CoWoS) with 16GB HBM2, enabling memory bandwidth of 720GB/s, and features NVIDIA NVLink interconnect support. Some of the marketing material talks about 150 billion transistors but that high figure includes the transistor count of the HBM2.

In terms of raw computing power, the P100 promises 21.2 teraflops FP16, 10.6 teraflops FP32 and 5.3 teraflops FP64. The P100 is being mass produced right now, NVIDIA says it will be available in its own DGX-1 deep learning system in June 2016 but OEM availability isn't expected until early 2017. At the moment, it's not exactly clear what this means for the availability of the consumer-level GP100 GPU.

The latest addition to the NVIDIA Tesla Accelerated Computing Platform, the Tesla P100 enables a new class of servers that can deliver the performance of hundreds of CPU server nodes. Today's data centers -- vast network infrastructures with numerous interconnected commodity CPU servers -- process large numbers of transactional workloads, such as web services. But they are inefficient at next-generation artificial intelligence and scientific applications, which require ultra-efficient, lightning-fast server nodes.

Based on the new NVIDIA Pascal™ GPU architecture with five breakthrough technologies, the Tesla P100 delivers unmatched performance and efficiency to power the most computationally demanding applications.

"Our greatest scientific and technical challenges -- finding cures for cancer, understanding climate change, building intelligent machines -- require a near-infinite amount of computing performance," said Jen-Hsun Huang, CEO and co-founder, NVIDIA. "We designed the Pascal GPU architecture from the ground up with innovation at every level. It represents a massive leap forward in computing performance and efficiency, and will help some of the smartest minds drive tomorrow's advances."

Dr. John Kelly III, senior vice president, Cognitive Solutions and IBM Research, said: "As we enter this new era of computing, entirely new approaches to the underlying technologies will be required to fully realize the benefits of AI and cognitive. The combination of NVIDIA GPUs and OpenPOWER technology is already accelerating Watson's learning of new skills. Together, IBM's Power architecture and NVIDIA's Pascal architecture with NVLink will further accelerate cognitive workload performance and advance the artificial intelligence industry." 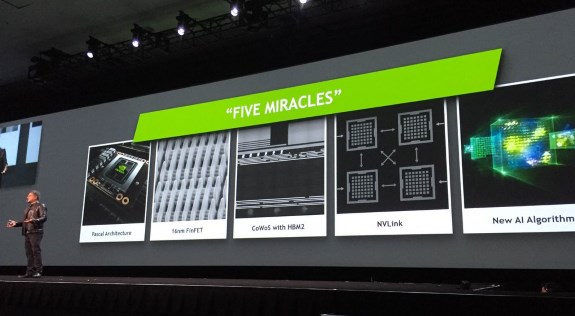