The NVIDIA DGX-1 is the first system designed specifically for deep learning -- it comes fully integrated with hardware, deep learning software and development tools for quick, easy deployment. It is a turnkey system that contains a new generation of GPU accelerators, delivering the equivalent throughput of 250 x86 servers.1

The DGX-1 deep learning system enables researchers and data scientists to easily harness the power of GPU-accelerated computing to create a new class of intelligent machines that learn, see and perceive the world as humans do. It delivers unprecedented levels of computing power to drive next-generation AI applications, allowing researchers to dramatically reduce the time to train larger, more sophisticated deep neural networks.

NVIDIA designed the DGX-1 for a new computing model to power the AI revolution that is sweeping across science, enterprises and increasingly all aspects of daily life. Powerful deep neural networks are driving a new kind of software created with massive amounts of data, which require considerably higher levels of computational performance.

"Artificial intelligence is the most far-reaching technological advancement in our lifetime," said Jen-Hsun Huang, CEO and co-founder of NVIDIA. "It changes every industry, every company, everything. It will open up markets to benefit everyone. Data scientists and AI researchers today spend far too much time on home-brewed high performance computing solutions. The DGX-1 is easy to deploy and was created for one purpose: to unlock the powers of superhuman capabilities and apply them to problems that were once unsolvable."

Powered by Five Breakthroughs
The NVIDIA DGX-1 deep learning system is built on NVIDIA Tesla® P100 GPUs, based on the new NVIDIA Pascal™ GPU architecture. It provides the throughput of 250 CPU-based servers, networking, cables and racks -- all in a single box.

The DGX-1 features four other breakthrough technologies that maximize performance and ease of use. These include the NVIDIA NVLink™ high-speed interconnect for maximum application scalability; 16nm FinFET fabrication technology for unprecedented energy efficiency; Chip on Wafer on Substrate with HBM2 for big data workloads; and new half-precision instructions to deliver more than 21 teraflops of peak performance for deep learning.

Together, these major technological advancements enable DGX-1 systems equipped with Tesla P100 GPUs to deliver over 12x faster training than four-way NVIDIA Maxwell™ architecture-based solutions from just one year ago.

The Pascal architecture has strong support from the artificial intelligence ecosystem.

"NVIDIA GPU is accelerating progress in AI. As neural nets become larger and larger, we not only need faster GPUs with larger and faster memory, but also much faster GPU-to-GPU communication, as well as hardware that can take advantage of reduced-precision arithmetic. This is precisely what Pascal delivers," said Yann LeCun, director of AI Research at Facebook.

Andrew Ng, chief scientist at Baidu, said: "AI computers are like space rockets: The bigger the better. Pascal's throughput and interconnect will make the biggest rocket we've seen yet."

The NVIDIA DGX-1 system specifications include: 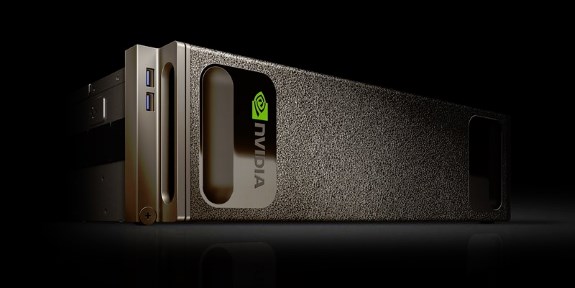