Posted on Tuesday, Apr 19 2016 @ 14:04 CEST by Thomas De Maesschalck
Market research by IHS suggests notebook makers are increasingly looking to higher-quality displays. Jason Hsu, senior principal analyst for the display chain at IHS, claims performance is no longer the key motivation for consumers to replace older PCs. Instead, OEMs hope quality of displays could become a major factor to spur replacement of PCs.

According to Hsu, the introduction by Microsoft of its high resolution Surfacebook last year is one reason higher definition displays are now becoming a key differentiator for premium notebook PCs.

Overall, the global notebook PC display market declined by 23% in the first quarter compared to the first quarter of 2015, according to IHS. Price erosion hit the PC market hard in 2015, with OEMs scrambling to produce low-cost notebooks to maintain their market share rather than rolling out innovative new designs, IHS said. Half of all notebook PCs sold in 2015 were priced below $500, and laptops costing $300 or less grew to encompass 15% of the total market in the fourth quarter, according to the firm. 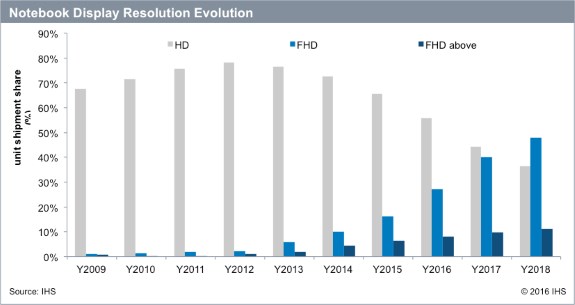